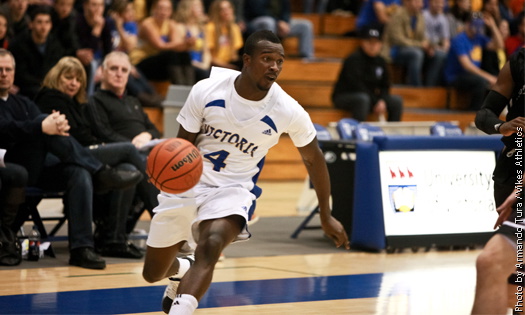 Plenty of action this past weekend in the CIS as we head toward the madness that is the CIS Final 8. The last undefeated team has fallen; the Scrubb brothers continue to break the Gee-Gees hearts and UBC stumbles late in the season.

In the most shocking upset of the year, the University of Toronto defeats the seventh ranked Ryerson Rams. 17 turnovers, 33.8% shooting from the field and a dismal 43% free throw shooting opened the door for the upset and UofT did not disappoint.

Fifth-year senior Arun Kumar saved a special performance in the last home game of his career with a big scoring outing leading the way with 28 points and posting 8 rebounds for the Blues. Fourth-year guard Alex Hill added 15 points in the Blues third win of the year.

Jordon Gauthier lead the way for the Rams with 15 points, and Aaron Best had a stat sheet stuffer of a game with 12 points, a season-high 19 rebounds, 5 assists and 3 steals.

In a Laurentian loss to York, Alex Ratte exploded for  42 points on 17/27 FG. Ratte is having a breakout year, averaging over 20 PPG, good for fourth in the nation in scoring.

The Axemen had something to prove heading into their game against the number three ranked and undefeated Cape Breton Capers on Friday night. Acadia had lost their two previous meeting with CBU in blow out fashion, but as the Capers found out the Axemen were looking to prove that this is a different team.

The AUS’ best defensive team frustrated the Capers to 28% field goal shooting and 24 turnovers en route to a 24-point victory handing the Capers their first loss of the year.

Anthony Sears came off the bench with a game-high 18 points and Sean Stoqua added 16 in the Axemen’s 14th win of the year.

Jimmy Dorsey (ranked 2nd in NPH top 50) had a double-double of 10 points and 10 rebounds and rookie of the year candidate Shaq Keith (ranked 10th in NPH top 50) added a club-high 15 points in the Capers first defeat of the season.

Victoria sent a major message to the CIS and the Pacific division heading into the playoffs by sweeping their weekend series with the number two-ranked UBC Thunderbirds.

Brandon Dunlap was red-hot going 8 of 10 shooting from the field leading to his team-high 24 points. Terrell Evans and Chris McLaughlin changed the game with their contributions off the pine combining for 25 of the Vikes 32 bench points.

Doug Plumb (8th ranked in NPH top 50) tried to lead the comeback attempt for his T-Birds finishing the game with 24 points, but UBC were never able to grab the lead away from the Vikes.

The back-to-back UBC loses could open up the door for number three ranked Cape Breton to slide into the number two spot in the CIS National top 10 rankings.

In the most exciting game of the weekend [and the season], the Ravens and Gee-Gees primed the nation’s capital with a level of intensity that will be displayed when Canada’s eight best teams battle for the CIS championship in March.

It took three extra frames, but the number one team in the white north kept their 19-game win streak alive and completed the season series sweep over their cross-town rivals.

Thomas Scrubb continues to make a strong case for national player of the year consideration posting a season-high in both points and rebounds with 31 and 18 respectively. Phil Scrubb (ranked 1st in NPH top 50) matched his brother’s point output with 31 as his own and added 7 rebounds, and 4 steals.

Warren Ward (ranked 7th in NPH top 50) flirted with a triple-double of 27 points, 12 rebounds and 7 assists bouncing back from his less than stellar performance in the previous Capital Hoops meeting. Johnny Berhanemeskal (ranked 28th in NPH top 50) showed his excellent conditioning playing a team-high 52 minutes adding 22 points and 7 rebounds in the loss.