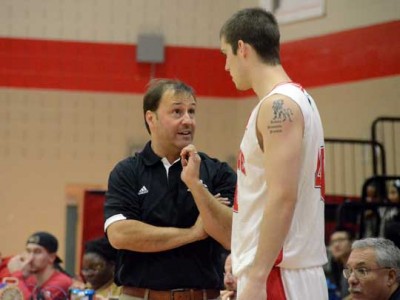 Hamilton, ON–After starting the season at 4-0 it was inevitable that this battle would happen, as both the Mohawk Mountaineers and the Fanshawe Falcons (London,ON) came into the game undefeated. However, one program would leave Hamilton with an L on their resume.

#1-Ranked Mohawk came off the tip strong looking like they were going to take total control of the game, but Fanshawe answered quickly with three straight threes and took the lead. After exchanging baskets, Fanshawe’s outside shooting continued to click and gave the Falcons the lead, to an ultimate 95-88 win over the reigning CCAA Champions.

With the Falcons shifting into a zone defense, the Mountaineers became very stagnate in the offensive end– guards weren’t able to get into the gaps and find open shooters, and the forwards were being suffocated in the low post.

In the second quarter, Fanshawe’s outside shooting continued, with everyone connecting from downtown and it was no match for the Mohawk defense.

Things didn’t change much in the second half.  Mohawk stayed in their zone, and the shooting from Fanshawe continued to be lethal from long range, with everyone getting in on the action! (Gareth Edwards, Kyle McConnell, Chavaun Miller- Bennett, Boyd Vassell)

The Mountaineers continued to make costly turnovers and poor decisions on the offensive end, as they allowed Fanshawe second and third chance point opportunities on. A lack of rebounding has not been something t the Mountaineers have had an issue with.  (17 turnovers and 39 rebound for Mohawk)

Mohawk would pick things up and chip away at the lead coming off the bench with energy, but down the stretch, instructions by Coach Jonker were not heard.

“We managed to work so hard on getting steals and denying the inbound, but when it came to the half court game we had guys helping off the ball on shooters  We were clear with our instructions every quarter, timeout and at half, do not help off shooters. They make an extra pass and a wide open shooter knocks down a three,” Mohawk Assistant Coach Mac Akrong told NPH.

The long range shooting from the Falcons, the mental mistakes and poor decision making from the Mountaineers would cost Mohawk their first loss of the season 95-88 and moving them to 4-1 and Fanshawe to 5-0.

The Falcons are one of only two OCAA teams left (Centennial) currently undefeated.