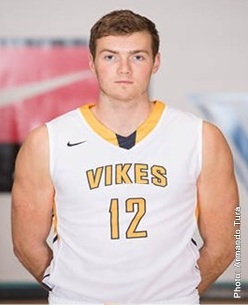 Abbotsford, BC – In a game that looked to be over at halftime, the University of Fraser Valley came alive in the second half, but their comeback fell just short as the University of Victoria Vikes completed a two game sweep of the number four ranked Cascades with a 78-72 victory Saturday night.

With the win, Victoria moves to 4-0 on the season, while the loss drops Fraser Valley to 2-2 in conference play.

The Vikes were led by 6’10” third year forward Chris McLaughlin, who poured in 22 points on 10-12 shooting, including a back breaking three late in the fourth quarter, as the shot clock expired, that ended all hopes of a Fraser Valley comeback. McLaughlin was a handful inside, converting a number of easy looks and keeping the Cascades big men off the floor with foul trouble all game.

“He’s come a long way.” UVic head coach Craig Beaucamp told NPH after the game. “He really is developing into potentially one of the top big men in the conference.”

Also for the Vikes, 6’4” guard Terrell Evans — who led UVic in scoring with 19 in the opening game Friday night — continued his solid play. The fourth year guard had 17 points for the game, including 10 points on 4-5 shooting in the first half.

Although McLaughlin and Evans provide Victoria with a solid one-two punch, and were the only Vikes to score in double figures this game, Coach Beaucamp stressed that his team will need to have multiple scoring options if they’re to be successful this season.

“We don’t really have one or two guys that are going to score forty or fifty points for us, we need contributions from everyone.” said Beaucamp.

For Fraser Valley, Kyle Grewal’s  first half mirrored the team’s performance as a whole. The Cascades, who were playing without fifth year guard Sam Freeman, struggled at both ends– with Grewal scoring only two points — and found themselves down 19 points at the half.

However, Fraser Valley looked more like the fourth ranked team in the nation in the second half, with Grewal leading the way and scoring 12 of his team high 21 points in the third quarter.

With the Cascades trailing by eight points in the fourth quarter, UVic went to a 3-2 zone, aimed specifically at preventing Kyle Grewal from isolating at the top.

Coach Beaucamp on the decision to go zone: “At that point in the game we were having a tough time getting stops, sometimes you just need to change the look.”

The decision to go zone certainly paid off, and after being outscored 27-16 in the third quarter UVic was able to play the Cascades almost even in the fourth quarter and hold on for the six point victory.

Also for the Cascades, Kevon Parchment played all 40 minutes and led his team in both scoring (23) and rebounding (9). Freshman point guard Manny Dulay struggled from the field, shooting 1-5, but looked very comfortable at the point in extended minutes.

The Fraser Valley Cascades will look to rebound next week when they travel to Vancouver to take on the 4-0 UBC Thunderbirds November 16th and 17th at War Memorial.

The Victoria Vikes are next in action when they host the 1-3 Trinity Western Spartans November 16th and 17th at McKinnon Gym.