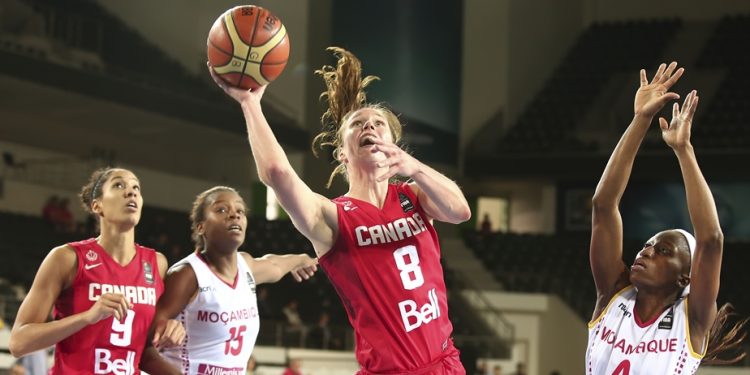 The 2011 Pan Am Games didn’t go as well for Canada Basketball as they expect the 2015 Games will – Puerto Rico, Mexico, and Brazil stood on the podium while Canada finished sixth.

Sometime after that and playing in the London Olympics Kim Gaucher briefly retired and considered hanging it up for good, but the Toronto 2015 Pan Am Games gave her a goal on the horizon.

“I was right into retirement mode in 2012 and heard rumours about this,” said Gaucher after Team Canada’s first practice together in Toronto ahead of Thursday’s start to the Pan Am tournament.

“Canada Basketball has grown so much and really put a lot into their Women’s program and it was something that I decided to stick around for.”

According to FIBA ranking, Canada should be the third-best team in the tournament after USA and Brazil but not every team sends their elite to the Pan Am Games so competition is harder to judge.

The chance to medal, and do it on Canadian soil, would be worth the wait for the Mission, B.C.-native Gaucher who has already spent 15 years with Canada Basketball.

It’s also a huge opportunity as a “warm-up” tournament ahead of the FIBA Americas tournament August 9-16 in Edmonton.

Gaucher will play a large role in both tournaments as a leader in the locker room, but also on the court. When head coach Lisa Thomaidis was asked about her potential starting five she singled out the veteran among her cast of talented hoopers.

“It’s not going to be a huge factor in terms of who is starting because I think everyone’s going to get rolled through in different combinations,” said Thomaidis before adding. “Other than Kim Gaucher, you can probably count on her, the other four might be mixed up along the way.”

When the message was related to Gaucher of her starting role, she was wordless for half a beat before saying: “Maybe she said that because she wants to be nice to me because I’ve hung around for so long. The young players are keeping us on our toes if you want to stick around when you’re in your thirties.”

Gaucher looks forward to a time when she may stick to the sidelines with the Canada Basketball coaching staff, but for now the 31-year-old shooting guard is relishing her role with the team.

She’s blown away by the media and fan interest in Women’s basketball at the Pan Am Games, and looks forward to leaving an impression on young girls seeking basketball idols.

WNBA Rookie of the Month Natalie Achonwa is one of the brightest stars on this women’s roster and said she grew up idolizing Kim Gaucher.

Of course, this made Gaucher feel old, but also recognize that everybody needs heroes to look up to.

“Nat probably didn’t know me until she started playing on Team Canada and now we have a chance this summer two times to be in the spotlight,” said Gaucher. “For young girls to see female role models in Canada is so huge.”

“Kim Gaucher hands down is our emotional leader, our longtime veteran,” added Thomaidis. “She’s been here through some tougher times but has stuck through it. We’re so proud of her she’s such a leader by example, a class act, a character person and we’re excited for her to have the opportunity to play at home.”

And fans should be excited to see her leading this team by example, to the podium.

Chad Vincent Off Back Board from AJ ...

In The Huddle – Canadian National Invitational ...