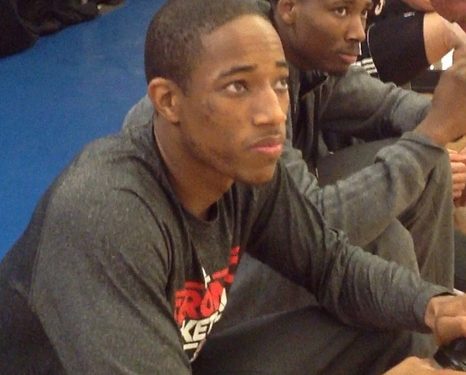 TORONTO,ON–Defense.  Particularly Chicago defense was the reason the Derrick Rose-less Bulls (4-3) absolutely stymied the Toronto Raptors (4-6) in a 96-80 rout Friday night at the Air Canada Centre.

The Raptors never led as the Bulls pulled away early in the first quarter. While the Bulls won by 16, it was never that close, even with Demar Derozan (37 points) having one the best offensive performances of his career.

It was a painful affair, with the Raptors down and out early in the third quarter, trailing by as many as 27 at one point. Raptors head coach Dwayne Casey said it was just one of those games.

“Tonight was one of those stinkers you have,” Casey said. “We were mentally fried, physically fried, but this is the NBA, there’s no excuses. That wasn’t us,” he said.

Derozan was the lone bright spot for the Raptors scoring his 37 from 13-22 shooting from the field-including four three-pointers-while going 7-10 from the free throw line.  He scored 15 points in the third quarter including the final 11 points of the period.

Derozan’s hot shooting in the second half was inspiring, and in a closer game could have made a difference, but with the Raptors down by such a large margin, it was all for naught.

The other Raptors’ starters struggled to create any scoring opportunities for themselves. Rudy Gay played well, finishing with 20 points and nine rebounds.  He shot 7-15 from the floor, nailing 5-6 from the charity stripe.

Meanwhile, Kyle Lowry struggled on the offensive end, scoring six points on 3-15 shooting, and dishing out eight assists. The Raptors frontcourt, which has often been one of their strong points this season, was also ineffective with Amir Johnson putting up three points and four rebounds, while Jonas Valanciunas finished his night with four points and eight rebounds.

The Bulls solid interior defense began early on and never faltered, leading to several ill-advised Raptors jump shots throughout the first half.  The Raptors shot 11-43 (25.5%) from the field in the half, and shockingly, it could have been worse.

A late surge by the Raptors in the second quarter brought it to within 14 points, with Lowry, Gay and Derozan all creating opportunities in the paint.

While playing strong defense, the Bulls’ frontcourt also had a field day in the paint. Joakim Noah scored 18 points while grabbing nine rebounds. Carlos Boozer finished with 14 and eight while Luol Deng had another strong performance scoring 19 points to go along with nine rebounds. All five Chicago starters posted double-digits in scoring.

It was easily the worst performance of the season by the Toronto Raptors, who were unable to carryover momentum from a dominant 103-87 win against the Memphis Grizzlies Wednesday night.

The Raptors will look to get back on track when they play the Portland Trail Blazers Sunday afternoon at the ACC.