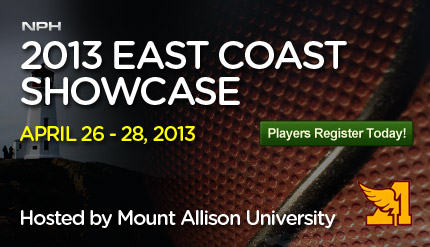 SACKVILLE, NB–With less than two weeks left before the first ever NPH Showcase takes place in New Brunswick at Mount Allison University April 26-28, we have compiled the list of confirmed players in the initial wave of the prospect list.

6’4 Wing Alfred Burgesson was the hidden gem in last year’s event, and will be returning, following a solid year with Halifax Grammar.

NPH East Coast Showcase alumni Erik Nissen has recently committed to the University of Maine and will play NCAA basketball in the America East conference after having a great high school basketball career in New Brunswick. Nissen generated this evaluation following his participation in the NPH Showcase last year:

Nissen was extremely impressive and is looking like a big time prospect to keep your eyes on. He has a great combination of size, length and toughness. At this showcase, he was matched up against 6’9 F Mike Armstrong which allowed us to get a good indication of his skill set against a fellow big. He displayed good footwork and ability to finish strong at the basket, however must learn to protect the ball by keeping it high when making his move, as he was stripped by smaller guards on multiple occasions. Nissen certainly boosted his stock at the First Annual NPH East Coast Showcase.

“I would highly suggest going to this showcase,” said Nissen. “It brings all the best players from around the maritime’s to one location. The competition alone is worth it!”

Part of this trip is to identify and evaluate the top talent in attendance, however equally as important to NPH is helping grow the game in this region by inspiring and providing guidance to the next generation of players in Atlantic Canada.

For any questions, concerns or comments regarding the NPH Showcase, please email info@northpolehoops.com

This is a pending list, and names will be added throughout the next three weeks.