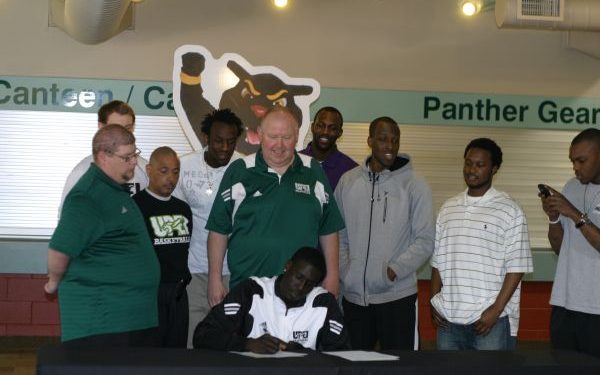 Charlottetown, PEI–Manock Lual the 6’6 forward from the University of Prince Edward Island, signed a professional contract to play for the Medway Park Crusaders in England.  The Crusaders play in the National League Division 2.

Medway Park seems to have the interest for CIS players and more specifically AUS players as Joseph Schow who graduated from Dalhousie played for the Crusaders this past season.  While Schow will not continue with Medway Park next season, he passes on the torch to Lual.

Manock Lual signing his contract with coaches and teammates looking on | Photo Courtesy: The Guardian

The recently graduated senior played out his full CIS eligibility at the UPEI.

“PEI was a rollercoaster, and I faced many adversities, but it is and will be another home for me.  I went through a lot of tough years to get where I am now but all of my experiences have fueled me and made me stronger, looking back I loved every moment of it.”

This past season at UPEI Lual became a serious threat on both ends of the floor causing matchup problems for defenders night in and night out.

After averaging 17.8 points per game along with 8.8 rebounds, a first team AUS all-star selection was earned.

UPEI had a massive turn around as first year Head Coach Tim Kendrick guided the ship to a 13-7 record, with the Panthers finishing third in the AUS, as opposed to a 7-13 finish in 2010-2011.

Lual spoke about the impact that the bench boss had on his team and career.

“Coach Kendrick has been amazing in changing everything around within the program. He turned the UPEI basketball program into a division one experience. I love the man; he is one of the main reasons why I am playing professional basketball. I never had someone believe in me the way coach has, someone to really take the time to see potential in me that I never saw in myself.”

Lual will now take his talents to England where he will not only compete, but carry on a piece of UPEI with him.

“I was always a competitor, but I wasn’t always fearless.  Coach taught me how to fear nothing…he instilled in me the will to get it done no matter what, that’s the Panther way.”