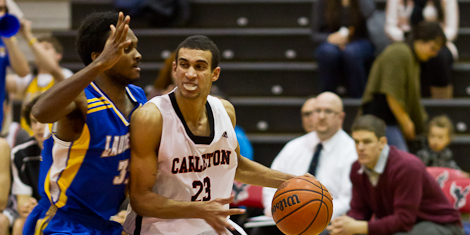 OTTAWA, ON–February 25th, 2012 marked the last night Cole Hobin, Willy Manigat And Elliot Thompson played at home in the Ravens Nest! The stage was set in the OUA-east semi final vs the Laurentian Voyageurs.

The Voyageurs are lead by Manny Pasquale who dropped an impressive 34 points against the Ravens in his lights out performance last night. Despite Pasquale’s outburst, the Ravens used their depth to end Laurentian’s season and advance to the OUA Final four by an 87-66 victory.

Carleton was lead by NPH #1-ranked player in the country, sophomore Phillip Scrubb who dropped a modest 23 points while dishing out 10 assits.

The first quarter was far from what you would expect during a Ravens home game, with the Voyageurs tying the game at 18 apiece after one quarter of play.

Carleton shooting an uncharacteristically low 25% from beyond the arc, with Willy Manigat (1-6) and Elliot Thompson (0-4).

The Voyageurs on the other hand converted five of their six three balls with the majority coming from the hot hands of Manny Pasquale.

However, bench production proved to be the difference between the Voyageurs and Ravens. Once Manny Pasquale was forced to sit out during the second and fourth quarter due to foul trouble, the Ravens capitalized going on various runs to build a lead.

Although the score might show a strong win by the Ravens, credit must be given to the aformentioned Manny Pasquale. The Ravens did not have a solid answer for his unconscious shooting, hitting  three point jumpers contested by two defenders 4-5 feet from the 3 point line on multiple occasions.

He caused Cole Hobin to rack up four fouls by the third quarter, something rare considering Cole is a lock down disciplined defender. Pasquale took step back fade away jumpers off a pro hop from deep midrange distances against a tenacious and disciplined Ravens defense.

When analyzing the box score, one will notice that Many Pasquale scored more than half his teams total points with 34!

Dave Smart and the Carleton Ravens finished the game strong while punching their ticket to yet another OUA final 4 appearance, where they plan on paving their road to another National Championship!

The defending champs are still undefeated with this  21 point victory being the closest the Ravens have been challenged at home all year!