What a day of U Sports basketball! Whether it was upsets, highlight reel moments or championship defining plays, the first day of the national tournament had it all. Seven months have led us to Ottawa so, let’s find out what happened in each quarterfinal: 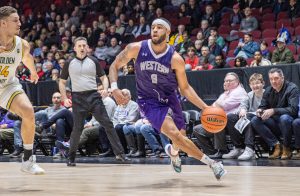 In game number one of the 2020 U Sports Final 8, the Western Mustangs and Alberta Golden Bears did not disappoint. Early in the second quarter, things were not going well for the Mustangs. Alberta’s front court of Brody Clarke, Cole Knudsen and Adam Paige were dominating down low. Then, something happened. Senior Nikola Farkic subbed back into the game and promptly wreaked havoc, stealing the ball three times. Farkic’s defence completely changed the pace of the game allowing Western to get out and run and boy did they. With the newfound space in transition, Omar Shiddo turned into a human flamethrower, splashing four threes in the second alone. This 21-0 run would turn out to be a preview for the rest of the game as the Golden Bears could never regain control of the pace. Instead, the fast pace favoured the undersized Mustangs who excelled with the extra space on the floor. By the time Eriq Jenkins drilled back-to-back daggers, Western had made 17 of their 28 threes. It didn’t matter Alberta came in as massive favourites, this Mustang team once again proved the power of clutch shot making.

Osborne and Ravens over power Layton and the Dinos 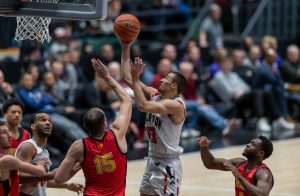 In a textbook Carleton Ravens performance, the nations number one team never relinquished control of the game. From late in the first quarter onward, the Ravens made the Calgary Dinos play at their pace and the Dinos couldn’t keep up. Even with National Player of the Year Brett Layton’s 23-point 16-rebound impressive performance and Max Eisele’s all-out effort, the Dinos couldn’t muster up enough offence in the half-court. Carleton’s veteran laden lineup did an outstanding job of playing within themselves and limiting easy Dino chances defensively. Offensively, fourth-year guard Isiah Osborne stole the show. Coming off the bench, Osborne poured in 20-points including going 4 for 5 from three. The other most notable Raven performance was from National Rookie of the Year Lloyd Pandi. Pandi put in 12-points and had multiple backbreaking offensive rebounds right when it felt like the Dinos had a chance to close the lead. It was an impressive performance that left no doubt the Ravens should be favoured to bring home the title once again.

Audu and Cohee make easy work of the Gaiters 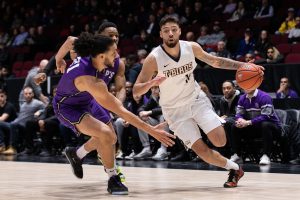 UBC is playing their best basketball of the season when it matters most. After rolling through the Canada West playoffs, the conference champion Thunderbirds came to Ottawa on an absolute high. That high continued Friday night as the champions of the west completely dominated the champions of Quebec from Bishop’s. In the first half, Grant Audu, the third-year wing, put on an offensive show.  The Toronto native came back to his home province and flew around the court, past the Gaiters, and to the basket seemingly at will. Audu would finish with a game-high 25 points and the UBC player of the game. Joining Audu with an impressive offensive display was Jadon Cohee. After struggling in the first half, the senior came out in the third quarter with something to prove and killed any potential chance of a Gaiter comeback. If this team continues to play this well, it’s hard to see them not playing in Sunday night’s final.

Veinot and Ochu make championship level plays when it matters most 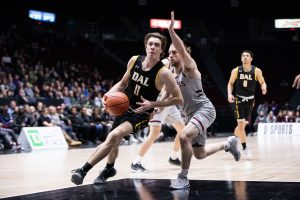 Keevan Veinot won the AUS MVP this season for a reason. The third-year guard is a man who does it all for the Tigers. Tonight, for example against the host Ottawa Gee-Gees in a couple minute span in the fourth, drew a charge and set-up three of the biggest buckets that led to his team’s victory. Veinot also put the final nail in the coffin with a turn-around low post move that showcased just how deep his game really is. Another player who excelled for the Tigers was Xavier Ochu. The AUS Defensive Player of the Year caused constant havoc all-night long defensively and on offence, found a way to make timely plays. For the Gee-Gees, Calvin Epistola played his heart out. With 18-points, the senior went out playing the only way he knows: hard. Another bright spot for the hosts was Guillaume Pépin. Pépin may only be in his second-year but, that didn’t mean the national quarterfinal was too much for him as he put up a game-high 23-points. Ultimately though, missed free throws will haunt Ottawa. As a team, they left 12 points at the line going 15/27. This and other things were an example of where Dalhousie set itself apart, making the timely plays that it takes to advance in a tournament like this.