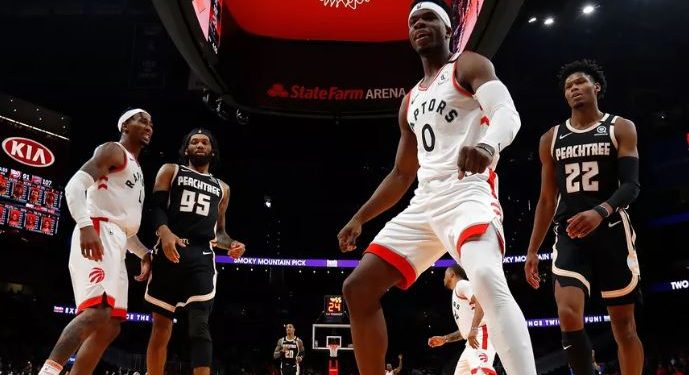 The NBA remains in tatters after the sudden loss of Kobe Bryant. Tributes have poured in from all over the world, from every walk of life, to pay their respects to one of the most influential voices of our generation. Emotions still wash over us like waves, swaying between the magnificent poetry of his legacy and the tragic weight of reality. But the best way to honour Kobe, is to endure, to succeed, and to channel Mamba Mentality with pride, respect and determination in all that we do. The Raptors join their peers, and millions around the globe, in honouring their fallen brother.

It was back to business for the Raptors when they welcomed the Hawks to the Scotiabank Arena on Tuesday night. The franchise aired a touching tribute to Kobe before the game where emotions still loomed heavy. The Raps were clicking from the jump, they had no trouble running with the Hawks with their defence creating opportunities. They forced Trae Young into 7 turnovers and held him to only 18 points, a significant improvement from their last meeting. Toronto picked up yet another injury as Gasol pulled up lame with hamstring tightness in the first half. This opened the door for Ibaka to have a big night and Chris Boucher to make a springy return to action. Siakam led the scoring, VanVleet hit clutch shots and KLOE flirted with a triple double, setting a new franchise high in assists in the process. Toronto led wire to wire in a much needed feel good victory.

Toronto crashed into Cleveland on Thursday riding a tsunami of momentum. They received another boost when just before tip, Kyle Lowry was honoured with his 6th straight All-Star selection. This matchup had the makings of a trap game, but to Toronto’s credit, they stayed locked in and carried a lead throughout most of the night. Ibaka helmed the center spot and led the charge with 26 points, he was cooking from the mid range with deadly efficiency. Lowry had 23 in support, VanVleet served up 12 dimes and Siakam had a great two-way performance with 19 points and a team high 5 steals. The Cavs ate into Toronto’s lead late, closing the gap to 1 point, but Powell had an exceptional final minute where he scored 8 consecutive points to put the game out of reach.

It was a quick turn around for the Raptors as they found themselves in the Motor City, aka Toronto West, to take on the puzzling Pistons on Friday night. The Raptors were led by Siakam, who is quickly regaining his scoring touch. He finished with a game high 30 points. Ibaka continued his hot play with 21 of his own while VanVleet was 2 rebounds and an assist shy of a triple double. Detroit posed little resistance against Toronto’s vaulted offense, the Raptors got out early and never looked back. They were supported by thousands of fans who serenaded the Pistons faithful with chants of “We the North”. With this win, Coach Nurse and his staff will now represent the Eastern Conference, and coach Team Giannis at the All Star game.

The Raptors and Bulls locked horns to close out the week on ‘Superbowl’ Sunday afternoon. It would be easy for the Raps to overlook the Bulls. Like a boat without a rudder, they have been drifting aimlessly throughout the season. However, if nothing else, they still play hard and they proved it by trading blows with Toronto and taking a small lead into the break. In the second half, Ibaka woke up the crowd with a pair of big time blocks and rim runs to wrestle the lead back from Chicago. Terence Davis followed up by catching fire from deep where he connected on 6 of his 7 attempts. The Raptors were simply too much for Chicago. The Bulls stood no chance against the defending champs as they matched a franchise best 11 wins in a row. 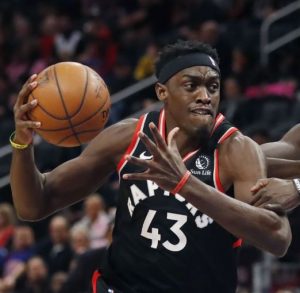 In what was widely considered a down week, Siakam was surprisingly able to net the Eastern Conference Player of the Week honours. He followed that up with an even stronger performance this week, inching ever closer to peak Pascal. Siakam is going through another adjustment to his game, he has recognized that teams are planning for him and that he needs a second and third option to counter double and triple teams. He has elevated his court vision and he is becoming savvier with when and how he attacks the rim. Altogether, Pascal is having a fantastic year. 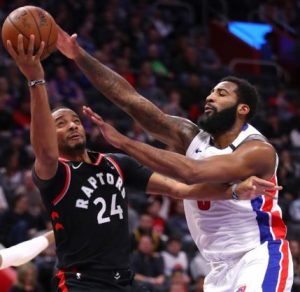 The Big Penguin has been putting up big numbers in a largely forgettable season for the Pistons. Drummond is a borderline All-Star, but without support, his high numbers just turn into empty stats. Still, its hard to ignore such a beautiful line as he did serious work on the glass against Toronto. In the right situation, Andre could shine, but he is limited as right now he and Rose are the only real threats on Coach Casey’s roster. 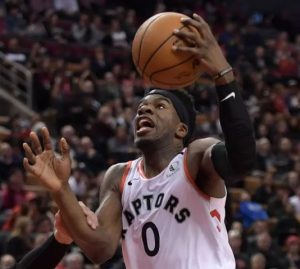 With Powell out of the lineup, there were minutes to be had and Davis, not one to shy away from opportunity, stepped up to fill the void left at the wing spot. Terence’s reliable defense and energy earned him an extended run where he showed how deft of a scorer he actually is. He played an excellent game and led all players with a career high 31 points in only 28 minutes. 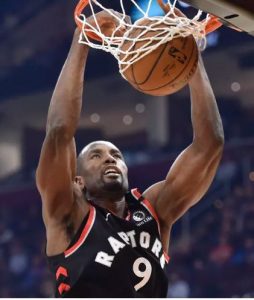 Serge Ibaka is a consummate professional who has the ability to adapt to any situation he’s thrown into. He has seamlessly taken over full time center responsibilities with Gasol out of the line up and he consistently provides scoring from the midrange and at the rim. His rebounding is vital, and his defense intimidates the opposition whenever they think to approach the paint. Most recently he is upped his 3-point efficiency which has opened another wrinkle to Toronto’s offense. Serge keeps ascending while the Raptors stay hot.

Toronto will welcome the Indiana Pacers on Wednesday night for what will no doubt be a competitive game. They will then travel to Indiana for a quick Friday night rematch at the Banker’s Life Fieldhouse. Immediately after, it’s a plane ride back to Toronto to prep for the Brooklyn Nets for the second half of a back to back on Saturday night.