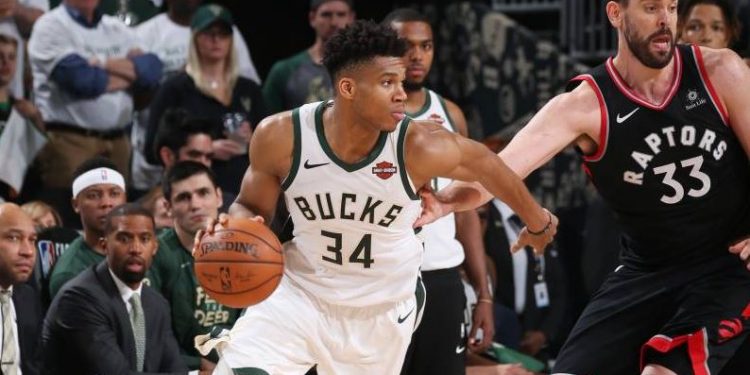 The Toronto Raptors, a team absent of any notable playoff success, finds itself one series win away from reaching the promised land; the NBA finals. Despite competing in the Eastern Conference finals once before, it is safe to say that this year’s team encapsulates their most successful playoff run. This is largely because this version of the Raptors are not punching above their weight, they are keepers of their own fate who very much belong in this battle. In their way resides one last mountain to overcome, the Milwaukee Bucks. The Bucks are playing at an elite level, while the Raptors have been stuck in second gear for most of the post season, unable to fire on all cylinders at the same time and relying almost exclusively on the broad shoulders of Kawhi Leonard to drag them this far. On paper, the Bucks have the advantage; they lead the league in most plus categories, they have (arguably) the leagues MVP, home court, a coach of the year candidate and are well rested. Yet, there is a feeling that if the Raptors play to their potential, they have a legitimate chance to threaten Milwaukee. This series will be littered with subplots, but the headline will center around the clash between two universal titans; Giannis Antetokounmpo and Kawhi Leonard. Toronto had an excellent defensive game plan to frustrate the Bucks and their absent shooters finally made an appearance to silence the fans for most of the first half. The Raptors were able to maintain a lead after the break based off their asphyxiating defense. They collapsed the paint whenever Giannis attacked and showed excellent ability to close out against Milwaukee’s deadly array of shooters. The Bucks eventually made their run, punctuated by a couple of rainbow bombs from deep to snatch the lead midway through the fourth. From there, they rode their consistent shooting while Toronto scuffled and missed key looks down the stretch. The Raptors were this close to stealing home court advantage but instead drop a tight one to the Bucks. 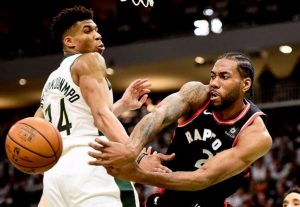 Riding high off the immortalized series clinching shot which slayed the impassioned 76ers, Kawhi Leonard carried over his strong play to lead his team. The Bucks are prone to give up the midrange and Kawhi took that opportunity to feast. Not only was Leonard asked to carry much of the scoring load, he also led Toronto’s defensive charge with his long rangy arms and immaculate timing on his jumps. Leonard finished with 31 points, 9 rebounds, 2 assists and 3 steals. Kawhi appears to be comfortable with his offense as nothing ever looked too challenging for the subtle superstar. Aside from a few miscues at the end of the game, the Raptors couldn’t have asked for much more.

Just as the Raptors revolve around Kawhi Leonard, the success of the Bucks begins and ends with one man, Giannis Antetokounmpo. Simply put, he is the key to the Bucks and slowing him down is paramount if Toronto wants any chance of advancing. The Raptors did a good job containing the Alpha-bet but Giannis was able to adjust after the break and proceeded to dissect Toronto’s defense, imposing his will on the game. Giannis scored 24 points with 14 rebounds, 6 assists, 2 steals and 3 blocks. The Greek Freak asserted himself with a fantastic night but make no mistake, there is another level to his game. 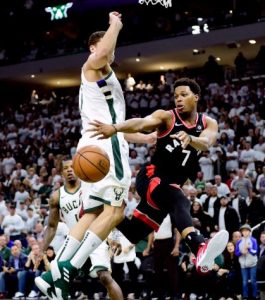 One of the most compelling story lines heading into this series is the point guard battle between Kyle Lowry and Eric Bledsoe. Many believe that the player who outduels the other will eventually lead his team to a series victory. The Bucks tried to pick on Kyle on D as they retained the size advantage, but Lowry was tough, and he received good help rotations from his teammates. KLOE was excellent on the offensive end, sniping timely triples like a big game hunter. He scored 30 points on 10/15 shooting (including 7/9 from deep), with 8 rebounds, 2 assists and a steal. Along with fantastic scoring, Lowry also brought a buffet of intangibles to the table, finished with a career night and had one of his best games in recent memory. Despite the loss, KLOE was incredible and deserved a kinder fate.

Pascal Siakam is essentially Giannis lite. He doesn’t have the same length or strength, but he is just as quick and impactful. Pascal is still missing the corner 3, which may suggest that he has yet to fully recover from the leg injury he picked up last series. He did a good job attacking the lane to keep the Bucks on their heels. Late in the first quarter, Siakam smashed a dunk on Lopez, a moment which will no doubt be appearing in posters coming soon to your local Wal-Mart. After struggling with his shot, he hit a big 3 at the end of the third which should boost his confidence. Siakam had 15 points on an inefficient 6/20 shooting with 6 rebounds, 3 assists, a steal and a block. Milwaukee will give him open looks and Pascal will need to convert them with efficiency to make an impact. 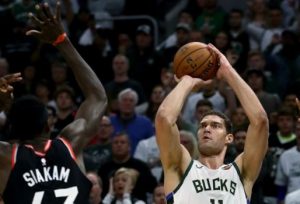 Splash Mountain erupted tonight to decimate the Raptors like the fleeing people of Pompeii. Brook Lopez had the game of his life, showing off effective range from deep as well as some rarely seen paint work. His points were timely, and his size gave him advantageous positioning all night. The Raptors had no answer for Lopez, he was a menace in the paint and extremely active on the glass. He rained three pointers from well beyond the arc to create separation on the scoreboard. Lopez snatched the ball away from Kawhi with under two minutes for a huge steal, all but ending Toronto’s final comeback attempt. Lopez had a playoff career best 29 points (including 4 triples) while adding 11 boards, 2 assists and a game high 4 blocks. Without Brook’s career night the outcome of the game would have been very different, he was the hero for Milwaukee.

Toronto will have a day to make adjustments before facing off against the Bucks again on Friday night. The Raptors have an opportunity to steal momentum in the series with a win heading back home to Toronto, but they will need to bring their best effort for a full 48 minutes.