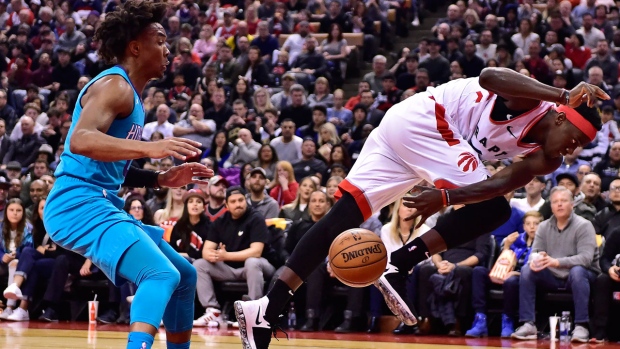 Toronto welcomed the Charlotte Hornets to the Scotiabank Arena for a Sunday afternoon affair. The Raptors were finally healthy and rested while the Hornets were playing the second half of a difficult back to back with the Boston Celtics. Led by the dazzling Kemba Walker, the Hornets are desperate to get into the playoff picture while the Raptors are pretty much locked in as the second seed and would be happy just to finish the season without picking up another injury. Charlotte was active and played courageously, they were competitive tonight because of their hustle, some hot shooting and Toronto’s own ineptitude. Charlotte was playing with urgency and took advantage of Toronto’s uncharacteristically sloppy play. We can talk about Gasol and Powell playing well, or that this was only the third game that Coach Nurse had his roster at full health, the growth of Pascal, or Kawhi being elite in ho-hum fashion, but all anyone will remember from tonight is the shot. This was a game that Toronto should have won but, with zeros on the clock, Hornets guard Jeremy Lamb threw up an absolute prayer from 48 feet, and for once, the basketball gods answered. As the fate of the game hung in the air, seconds felt like an eternity, the Scotiabank crowd held their collective breath, but all at once, they were deflated when the ball swished through the basket. The arena fell silent in disbelief while the Hornets celebrated as if they won the championship.

Pascal Siakam was Toronto’s renaissance man as he did a little bit of everything tonight. His evolution into superstar has been dramatic but with the added attention we have also seen an uptick in turnovers (5). Siakam will get a pass because he makes up for those mistakes with stellar defence, potent offence and endless energy. Siakam did all he could tonight and, considering his body of work, he should have the Most Improved Player award all but wrapped up. Pascal hit 9 of his 14 shots for 23 points, he also pulled down 7 rebounds, handed out 5 assists while picking up a steal and a block.

Dwayne Bacon may not be a household name (to be honest I had to look him up), but the Hornets have something in the sharp shooting guard. He isn’t going to be a super star or a max contract player, but in a few years, I can see Dwayne developing into a reliable outside threat. Aside from Walker, his name was the most mentioned for Charlotte on the broadcast. Bacon was sizzling as he scored 20 points, including 5 three pointers and 3 assists. His shot was unexpected but effective, he burned the Raptors again and again when given space.

Kawhi Leonard is starting to shift into playoff mode as he had another extraordinary night. He puts up incredible numbers while playing suffocating defence yet somehow, he makes it look so casual. We are also not seeing as much Kaw-iso ball these days which tells me that he is learning to trust his teammates. Despite the loss, Leonard was the most dangerous man on the floor scoring 28 points with 9 rebounds, 3 assists and a couple of blocks.

Norm Powell found himself at the end of the bench and outside Coach Nurse’s rotation over the last few games. After a lackluster first half, Nurse gave Powell a look at extended time and Norm responded with inspired play. In 12 minutes of action, he was disruptive with his defensive energy, he made good decisions with the ball and he cashed in on his shots at a high rate (4/5). Norm chipped in with 10 points, an assist, 2 steals and a block. Powell is fighting hard to be included in Nurse’s playoff plans.

Kemba Walker is an incredible talent however I fear he is wasting his best seasons playing for a franchise that hasn’t had any real growth since he was drafted. He has been the Hornet’s deadliest weapon for years and it’s a shame that management has not been able to surround him with a better supporting cast. Walker has beautiful mechanics on his jumper and shows great creative ability with the ball. He was carving up the Raptors at the point of attack leading to a series of drive and kicks. Kemba scored 15 points with 8 rebounds, 13 assists and 4 steals. Most people have written the Hornets off but Kemba still has a lot of fight left. Don’t be surprised if they make the playoffs off his sheer stubborn determination.

The Chicago Bulls will pay Toronto a visit on Tuesday night for the first of two meetings this week. This will be a great opportunity for the Raptors to get back on track.