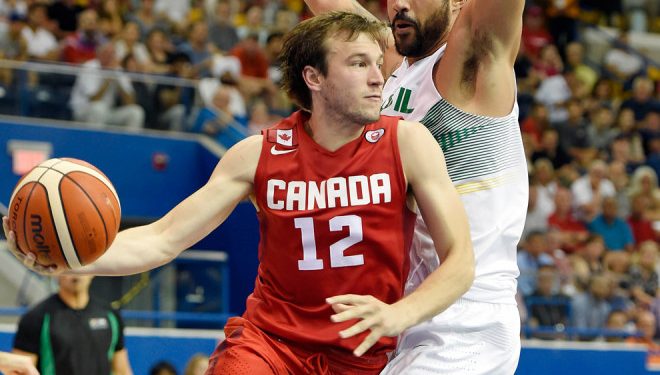 Team Canada’s Senior Men basketball squad squeaked out a win against Italy, topping the hosting Italians 74-71 in an exhibition match.

Canada improved to 3-1 on their exhibition tour in Italy, after knocking off Italy, China, and splitting their two games against Croatia.

Khem Birch led all Canadians with 13 points and 11 rebounds in nearly 33 minutes on the court, while Philip Scrubb added 12 points and eight rebounds, en route to the Canadians out-rebounding the Italians 51-33. Tyler Ennis had 11 points and eight assists in the win, while Italy’s Alessando Gentile led all scorers with 16 points.

Canada stayed ahead of Italy for most of the game, holding a narrow lead in a tough battle in front of the Italian crowd.

The Canadians have been rolling with a starting lineup of Anthony Bennett, Melvin Ejim, Tyler Ennis, Brady Heslip and Thomas Scrubb. The team will be lacking the presence of NBA’ers Andrew Wiggins, Nik Stauskas, Kelly Olynyk, and have had to make-do with the talent left available. So far the reserves turned starters have been performing admirably, with Heslip exploding for 33 against China in their previous game.

The team plays their final game of the exhibition tournament against Puerto Rico on Wednesday.