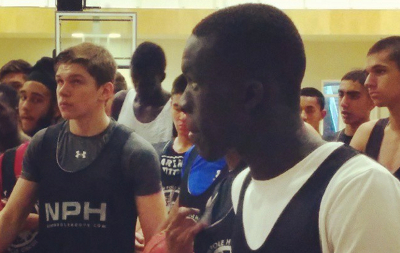 Less than a week away from the second last stop of NPH’s National Showcase Circuit in Olds, Alberta; a central locale between the major cities of Calgary and Edmonton.

There’s more than just oil rigs to dig out in Alberta. It has been referenced by National Scout, Tariq Sbiet as “The Sleeping Giant” for Canadian basketball prospects.

Every year there is talent that makes a strong impression in these camp environments. Last year Simar Bajwa was a name that IVY League schools quickly got familiar with. A 90% academic average coupled with high level play making ability provided more interest from this conference in the NCAA.

At least a dozen CIS prospects stood out as well in the first visits to Olds.

As far as this list below goes, there will be a few new name that leaves their mark, however the concern for prospects in Alberta is not how they show out the first time, instead it is the rate of their development.

There are segments of the NPH Showcase off the hardwood that will serve as guidelines to ensure continuous growth as opposed to settling for being the best at camp or in the respective province. Patterns have shown that Alberta prospects do not #MaximizePotential. We’ll be in the province to hopefully get proven wrong.