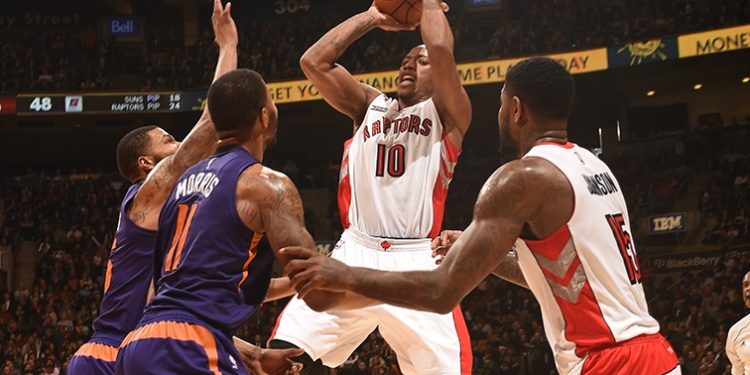 Toronto, ON- This was a statement game.

Sure, the Toronto Raptors were 11-2 heading into Monday night’s game vs. the Phoenix Suns. Sure, they finished a seven game home-stand going 6-1. Sure, they have even bested two Eastern conference rivals in Washington and Cleveland so far. But you don’t prove you’re for real until you start beating the better teams in the Western Conference.

The Suns came into the Air Canada Centre Monday night sitting 7th in the West, having won their last four games while sporting a 5-2 record on the road. Despite this, the Toronto Raptors beat the Suns 104-100 in what turned out to be a nervous final few minutes, and a nail-biting finish.

The Raptors entered the fourth quarter with a 15-point lead, after comfortably holding the Suns at arms length since late in the first quarter. It seemed a sure win, until Phoenix started playing small ball. Just a minute into the fourth, the Suns made five straight baskets, including four three-pointers to cut the lead to three. The final few minutes was an exciting back and forth that saw the Raptors come out victorious.

It’s no mystery they are one of the best three-point shooting teams in the league,” said coach Dwane Casey. “In transition, they can get back in the game just like that.”

That was the reason Casey had to take out his best player.

But the big man, who had a double-double with a career high 27 points and 11 rebounds, had to be pulled with 4:45 left in the game. Casey ended up going with a smaller, quicker lineup that ended up making several key plays. It culminated in a Kyle Lowry steal that led to a jump ball.

“It was huge. That last play when he dove on the ball and just poked it away…it was huge in that situation. He just found a way to get it,” said Casey.

The Raptors won Monday’s game with a combination of Jonas Valanciunas dominance and balanced scoring from the usual suspects. Valanciuncas quickly outmatched the Suns’ big men, getting both Miles Plumlee and Alex Len in foul trouble early. When his teammates found him, Valanciunas scored, going 10-11 from the field, and 7-8 from the free throw line.

“He dominated, he got the ball in low block, and he was getting those 3-foot, 5-foot shots he always makes,” said Demar Derozan, who also praised the big man’s rebounding.

As you might have noticed, the Raptors didn’t shoot the ball particularly well, finishing at a 45% clip. The Suns were better in that category. The Suns also outrebounded the Raptors and shot better from beyond the arc. But like so often this season, the Raptors benefited from protecting the ball (12 turnovers) while getting to the charity stripe. They scored 26-32 from the free throw line, compared 8-11 attempts from the Suns.

Despite many numbers favouring the Suns in the final boxscore, it was the Raptors that looked the better team for 40 of 48 minutes, and that, inevitably, was good enough to win.

“That is an extremely talented offensive team, they came back and played extremely well tonight,” said Kyle Lowry, complimenting a team that could have won on another night.

The Raptors continue to hold their lead atop the Eastern Conference, now sitting at 12-2, two games ahead of the second place Washington Wizards. The schedule now takes the Raptors to the deep south to play the Atlanta Hawks Wednesday night. Their schedule becomes increasingly difficult with a date with the Mavericks before a three game road trip to the west coast.

Tyler Ennis from Brampton, Ontario was on the Phoenix Suns roster, but was inactive Monday night. Ennis was drafted 18th overall in the 2014 NBA draft and has featured in two games so far this season.

James Johnson made his return to the Raptors roster after missing three games with an ankle sprain. Coach Casey kept his workload light, with Johnson seeing just under four minutes on the court.

The crowd at the Air Canada Centre was as lively as usual. In the third quarter, with the Raptors holding a comfortable lead, Kyle Lowry went into beast mode, getting a block, a steal an assist and forcing a charge in a span of a minute. The sellout crowd of 19,800 rewarded his play with chants of “MVP”

The 9-6 Phoenix Suns continue their NBA campaign by heading back home to take on the Denver Nuggets Wednesday night.