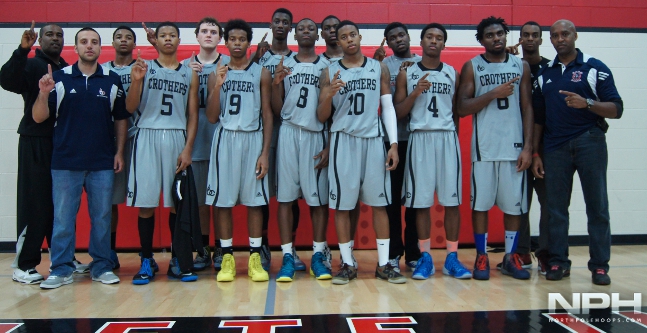 ORANGEVILLE,ON–As far as we’re concerned, the season has already begun. I can also make the argument that the season never really came to an end. As we all know, “basketball never stops.”

Over the weekend in Orangeville, the NPH team was at the Athlete Institute tournament, that featured a crop of talent from various age groups and regions.

It was a long weekend of talent evaluation, that was capped off with a Bill Crothers championship victory over home team Athlete Institute Prep.

In the victory, Trae Bell-Haynes lead the way with 18 points and a flurry of assists as he was able to get into the gaps, draw defenders and consistently find the open man.

For Bill Crothers, it was “pay back” of sorts, after Athlete Institute came into the Colts gym and ruined the BCSS home coming a few weeks ago.

“I think it’s great because it kind of reiterates everything we’ve been working on, and shows we’ve grown a lot from the first couple of games, which I’m most proud of.”

Rashawn Browne, who was brilliant over the weekend, seemed to be fatigued, after playing heavy minutes in two games previously, in less than five hours.

For AI, Kemar Alleyne had a strong game, as he was playing with confidence, slashing to the cup and hitting from deep, posting a team-high 15 points. Dwight Richards put up 12 points (all in first half) before seemingly spraining his ankle and exiting the game.

However, it was Bell-Haynes that played the role of game-changer and orchestrator for Crothers as he created for himself and teammates.

“I think he showed why he is one of the top point guards in Canada right now…he picked them apart in the screen and rolls, he had an answer for everything.” the Crothers bench boss continued.

After speaking with a calm, confident and composed Bell-Haynes, he said, “We were coming off two losses in a row with both Athlete Institute team (high school and prep), so very happy we beat both of them. But as a team we picked up everything on offense and defence, we were trusting each other.”

Bell-Haynes was quick to credit the collective efforts of the group, for putting him in a position to be successful.

“Individually, it comes when your playing well as a team.”

The Colts are undoubtedly clicking as a group early in the year, sharing the ball and thriving in the transition game.

Thanks in large part, to the engine that is Trae-Bell Haynes.