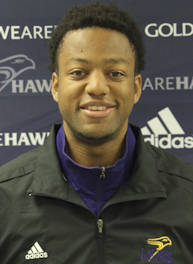 WATERLOO, ON – The 46th annual Naismith Classic wrapped up this Sunday with the Laurier Golden Hawks blowing out the Waterloo Warriors 77-55. Will Coulthard scored 23 points that included five three point makes on six attempts. Laurier  finished the preseason tournament a perfect 3-0.

Max Allin finished the game with a double-double of 12 points and ten rebounds. Patrick Donnelly also had a strong game off the bench scoring 11 points and grabbing five rebounds in fourteen minutes of play.

“You know what he is a pretty aggressive player. I try to stay out of his way most of the time. I thought he set the tempo early,” Said coach Greg Francis in regards to Gill’s hot start. He finished the game with 17 points. Fifth year guard Wayne Bridge had 13 points and eight rebounds, while rookie guard Myles Charvis added 10 points.

Coach Campbell made one key defensive adjustment when he decided to assign third year wing Jamar Forde to guard Gill, who did not score a single point after halftime.

“Jamar did a great job, he rebounded well and defended really well. He got a bit of a Charlie horse on Friday night but it was a great effort by him. He’s had a great fall,” said Campbell. “We’re playing better basketball at the end of todays game than we were at the end of Fridays game.”

The Golden Hawks overcame an eleven point deficit at the end of the first quarter, outscoring the Warriors 65–32 the rest of the way. “Laurier showed that they have some really good experienced guys returning and even though they came out a little bit slow I thought that their experience and talent helped lead them,” said Francis.

“If you shoot jump shots against Laurier you’ll lose every time, they have better shooters as a team than most teams in the country.”