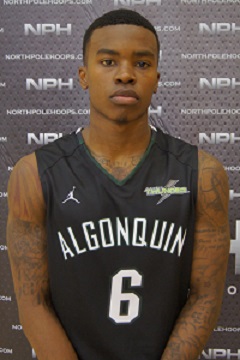 Height is not a factor for Njuguna Waiganjo.

“Maximizing your potential” is a phrase we, at NPH have consistently used when discussing prospects.

Njuguna Waiganjo has seemingly maximized his potential, a rarity at any level.

The 5’11 point guard out of the nation’s capital (Ottawa, ON) is fresh off an MVP performance in Montreal, Quebec where he carried his Algonquin Thunder to a 5-0 record and the Dawson Classic title.

What Waiganjo does on the floor, a coach cannot teach. He knows when to turn it on when his team needs a bucket, and did so over the entire weekend. Adding to Waigajo’s versatility is the fact that he’s interchangeable at either guard spot; he can man the point and facilitate, or shift over to the two-spot and put the ball in the basket when necessary.

Waiganjo motivates himself and his teammates, while orchestrating the symphony that is the Algonquin Thunder.

“He drills his body into people, it’s relentless, his heart is huge…lack of size is nothing. A friend just said to me, you don’t even need to coach, you have a coach on the floor,” Algonquin bench boss Trevor Costello told NPH.

The senior lead guard came to Canada from Kenya, where he began his basketball career at Sir Robert Borden high school, followed by a year at Algonquin, before transferring to Lakeland, and back to home base with the Thunder.

Waiganjo is now in his final year, with his focus on the upcoming season and a CCAA national title.

However, one can’t help but wonder how the compact PG would perform against higher level competition.

“I’m not trying to look too past the season but hopefully, God willing, the opportunities that come my way I’ll grab them, whether it’s going overseas or in the NBL Canada, whatever it is, Ill take it…I’m willing to work for whatever.”

Possibly, but we would like to see him compete in a gym against pros. A logical place to start would be in his hometown, with the NBL Canada expansion franchise, Ottawa Skyhawks.

Playing at the CCAA level, players don’t typically get the respect, credit or recognition that they deserve…that is the harsh, flat out truth.

“We have a lot of talent in the CCAA…you just have to come and see him play,” said Costello.

“My whole life, I’ve been an underdog, wasn’t highly recruited out of high school, barely made Algonquin, but I always had a chip on my shoulders,” explained Waiganjo.

The CCAA All-Canadian is in position for a major year, with his Algonquin squad possessing the pieces, chemistry and leadership necessary for a national championship run.

“I grab the guys together whether it’s team dinners or otherwise, everything is team oriented. I hold myself high on leadership.”

Njuguna Waiganjo is one of the top players in the nation…and height is not a factor.

“I’ve been doubted my whole life, so this is nothing new.”