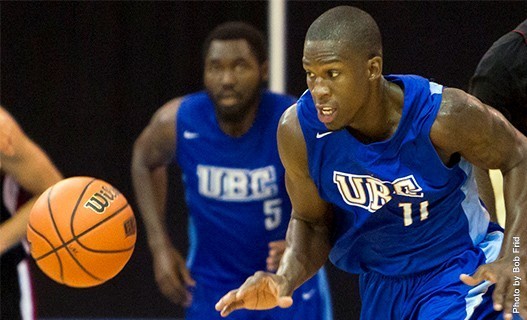 The most wonderful time of the year is upon us in Canada. The CIS is in full playoff mode with the OUA Final Four field set, the first round of the RSEQ ready to tip, the CANWEST initial stage wrapped up and the AUS battle royal awaiting the opening bell at the Metro Centre.

Only eight teams will be in the nation’s capital and only one spot is reserved for the hometown Carleton Ravens. This may be one of the most exciting CIS playoff seasons yet with so many capable teams hungry for a national championship.

With the UBC Thunderbirds win over Alberta two games to one in their best of three games series, they now move on to host the Canada West Final Four as the squad with the best record after the regular season.

The T-Birds, Winnipeg and Fraser Valley all needed a third and deciding round one game to advance to the final four. Victoria was the only team in the first round to sweep their opponent.

The CanWest final four will begin on Friday, March 1 with Winnipeg taking on Victoria, and Fraser Valley going for an upset against host UBC.

The two teams that make it to the finals will lock in their spot to appear in Ottawa for the nationals.

The AUS is setting up for what could be the most thrilling of this weekend’s conference championships. In the quarterfinals St-FX will take on Dalhousie, and Saint Mary’s and UPEI will do battle.

Acadia and Cape Breton earned first round byes by virtue of having the top two regular season records. The Capers will face the winner of the St-FX and Dalhousie game, while Acadia will be awaiting the result of the Saint Mary’s versus UPEI game.

On paper it looks as though the Capers and Axemen will be on a collision course for the AUS crown, but playoff basketball always offers up surprises.

The RSEQ semi-finals will start Wednesday February 27, and being the smallest conference in the CIS (only 5 teams) there will be a lot of familiarity in the playoffs.

Concordia fumbled their opportunity to host Bishops in the semi-final by losing their last game of the regular season to Laval in a blow out 84-62. The Stingers will now have to go on the road to defend their RSEQ crown from a year ago.

In the second semi-final contest McGill will host UQAM. The Redmen won the season series with UQAM three games to one, however UQAM got their one victory on Sunday in the last game of the year 59-44. The game had no impact on the post-season seeding, but the win might give UQAM a little bit of hope going into McGill’s gym on Wednesday night.

Carleton, Ottawa, Windsor and Lakehead will do battle for the Wilson Cup at the Mattamy Athletic Centre beginning on Friday, March 1.

After spoiling Ryerson’s chances of hosting the final four with a 74-70 victory, Ottawa will look to move on to the final eight where they are sure to be blessed with some hometown support of their own. A win in the semi-finals against the up-tempo Windsor Lancers would all but ensure them that chance.

In the second semi-final game, the longest win streak in the country, currently at 19 games will be on the line as Carleton and Lakehead lock horns. The Ravens are the number one team in the country, and defending Wilson Cup and CIS national champions. Coach Dave Smart will have his team ready to go with the possibility of avenging their only loss of the season; which came at the hands of Windsor.

If Carleton and Windsor were to win and meet in the finals it could be one of the most anticipated Wilson Cup finals in quite some time.

Be apart of the madness when the 2013 OUA Men’s final four tips off (Friday March 1, Saturday March 2) at the Mattamy Athletic Centre. Tickets are available HERE.