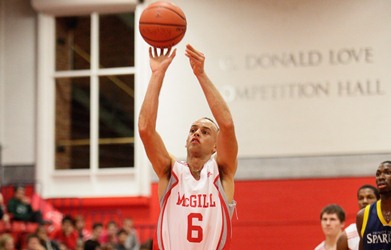 AJAX, ON–With CIS Nationals less then one month away, all teams are looking to tighten ship and pick up wins in regular season action and in their respective conferences.

The Axemen did it with defense once again cruising to a 16-point win over the X-Man. Julius Antoine and Davonte Provo’s new team was held to just 38% shooting from the field and also were forced into 15 turnovers which led to 16 points off those mistakes for Acadia.

The number four ranked player in the country (according to the NPH top 50 CIS players) Owen Klassen led five Axemen in double-figure scoring with 20 points and added 15 rebounds for his ninth double-double of the season.

Jeremy Dunn (16th ranked player in the nation according to the NPH top 50 CIS players) led the way for the X-Men with a game-high 21 points and 4 rebounds.

Had it been a football game in the RSEQ the score line may have been reversed, but unfortunately for the Rouge ET Or this one wasn’t played on the gridiron. The Redmen sweep the season series with another blowout victory over Laval and improve to 8-4 on the season and hold a share of the top spot with Bishop’s in the RSEQ.

The Redmen got 34 points from their reserves led by Nathan Joyal’s game-high 17 points. Joyal went a perfect 9 for 9 at the foul line, and also pulled down 5 rebounds to add to his stat line.

There will be 14 games on the Canadian hardwood tonight with games in each Conference.

The Rams will be looking for redemption after suffering their first lost of the season to the Ravens in a game that was never really in any type of doubt.

Coach Roy Rana will certainly have his team motivated for the challenge of defeating the Ravens at home where Carleton is unbeaten this year.

Windsor and Lakehead will play the first of two straight games in two straight nights against each other in Thunder Bay with first place in the OUA West division at stake.

Lakehead is riding a six game winning streak where they really haven’t been challenged in all six of those victories. Windsor boasts a seven game win streak and their competition over those seven game have been a little tougher.

The home court advantage should play a factor in this one. The Thunderwolves are 5-2 at home this season.

The Stingers are going to try and keep pace with McGill and Bishop’s at the top of the RSEQ mountain. A win for the Stingers and all three teams will be tied with 16 points.

The Gaiters are hoping to distance themselves from Concordia and with a game in hand on them a win can give them a two game led and one less team to worry about, for the moment anyway.

The tied in the Prairie division will be broken. As the Huskies and the Bisons find themselves in a similar situation to Lakehead and Windsor. The opportunity to get the upper hand with time in the regular season slowly expiring is gold right now for both teams.

The Huskies have reeled off two straight wins but still have their tough loss to bottom feeding Brandon on their short-term memory. They may be the hunger team here now knowing they definitely can’t take any team for granted.

UBC is on a ten game winning streak heading into this mini series with UNBC. The Thunderbirds have shown all year that they are one of the nation’s most dangerous teams. Led by Doug Plumb (number 8 ranked player in the country according to the NPH top 50 CIS players) averaging 16 points, 5.8 rebounds and 3.2 assists per game, the number two ranked Thunderbirds definitely have they eyes set on a trip to Ottawa.