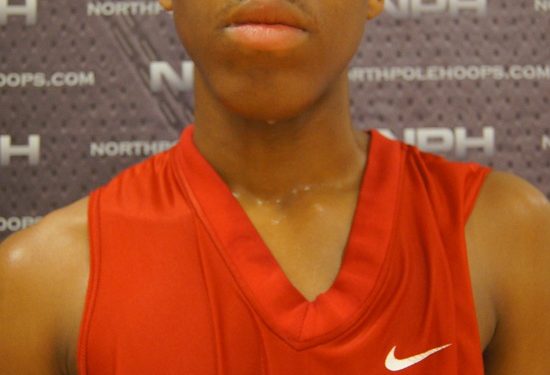 ST. CATHARINES, ON–Leonard Riley has arrived. It took him some time, but he’s here!

The 2013 6’2 point guard for Stanstead (Quebec) has been leading the CAIS tournament, averaging 33 points per game, while filling every other statistical category in the process.

After watching two of his games, I decided to start tracking his statistics outside of scoring. Riley posted 27 points, 13 rebounds, 14 assists, 7 steals, 4 blocks against Royal St. George in the victory.

Leonard Riley is a big sleeper in the class of 2013!

We must take into account the level of competition he is up against, however he also posted 28 on St Andrew’s; a team that features Chris Egi & Daniel Cummings, along with averaging 30+ PPG in every tournament Stanstead has played in.

“He has great size and quickness for his position…incredible at getting off his own shot whether it’s getting to the basket or shooting over defenders,” Stanstead Head Coach Mark Bembenek told NPH.

“I think the only reason he is underrated and not many people know him as a prospect is because he didn’t have a lot of exposure,” continued Bembenek.

As for Stanstead, Coach Bembenek tells NPH the program is on the upswing with access to a plethora of resources, which includes funding and playing in the New England Prep League due to the school’s proximity to America.

“It’s perfect; everything is in place because the school is now backing the basketball program as they have backed the hockey program.”

Leonard Riley is the definition of “Diamond in the rough” but the question is, how good is he?

From what we have gathered, he is undoubtedly a talented scorer with great passing ability; however we would like to see him play in a different environment with stronger competition.

Therefore, we have extended an OFFICIAL invitation to Leaonard Riley for the 2nd Annual NPH Platform coming in December, which will feature some of Canada’s Top Prospects!

“Im ready for the challenge, I think I will learn from it.”

Leonard Riley is a sleeper in every sense, under-recruited and flying under the radar. But not for long…that’s a guarantee.