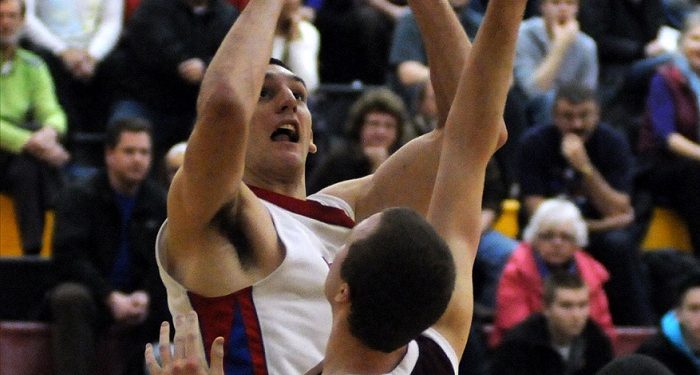 HALIFAX,NS–The Decisive AUS weekend has come and gone and St FX has taken over sole possession of first place with a win over Cape Breton on Wednesday February 15th.

On Saturday, the UPEI panthers rolled into Cape Breton and looked like they left their defensive games on the bus in a 111-90 loss to the capers. Jimmy Dorsey put on an excellent showing with a triple double with 20 points, 12 assists and 12 rebounds. Geoff Doane was the guy for the Panthers as he dropped 22 points in 23 minutes of play off the bench and made a serious statement about more playing time.

At St FX on Saturday there was a much better game as the Axemen and the X-Men played a great back and forth game with the X-Men winning it 87-82. St FX jumped on Acadia in the first and opened an eight-point lead and Acadia stormed back taking a 4 point lead into the half at 37-33. In the second half X took control and opened up a lead but Acadia kept clawing in a highly competitive game had a playoff aura. Tyrell Vernon led St FX with 24 and Anthony Sears led Acadia with 22.

On Sunday Acadia and UPEI traded places with the Axemen playing at Cape Breton and UPEI playing at ST FX. In a low scoring affair at ST FX, the X-Men held off the Panthers in overtime for a 70-69 win and a tie for first place. The pressure of the game showed as both teams really struggled offensively. Jonathan Cooper led UPEI with 22 and Terry Thomas led St FX with 15.

In Cape Breton, the story of the game was not only the Capers 111-106 win over the Axemen but Jimmy Dorsey’s scoring explosion with 49 points on 15 for 30 shooting. Again this was a competitive game that was back and forth throughout and Acadia seemed to leave their defensive game on the bus as well as they didn’t make any crucial stops down the stretch. Of good news for the Axemen, Freshman sensation Tyler Scott returned to play, however Anthony Sears was unavailable. Owen Klassen led the Axemen with 35 points.

The Capers proved they were legitimate contenders by knocking off the number 1 and number 2 teams on back to back nights and slid into the third spot in the standings only 2 points out of first. They also clinched their birth in the post season.

The X-Men even though they struggled against UPEI, re-asserted themselves as the dominant team in the AUS and if they take care of business at Memorial this weekend and hosting Saint Mary’s will wrap up first place in the conference.

Jeremy Dunn of St FX spoke with NPH after the win at Cape Breton on February 15 saying “we just had to transfer our high success at home that was created by good team D onto the road and we did that”.

Dunn also stated “we went through a slump but it has made our team stronger and tougher and helped us get wins over the top three teams in the conference”.

The Panthers and Axemen both came out of a bad weekend but the road ahead for each is intertwined as they battle at Acadia this Saturday and Sunday with basically the #2 spot and first round bye on the line. UPEI controls its own fate, with one win at Acadia and a win at home against Cape Breton on February 25; they will secure the number 2 spot and the first round playoff buy.

In other action the Saint Mary’s Huskies took care of their fate by dumping Memorial in both games 90-61 and 74-63. This combined with a Dalhousie/UNB split allowed the Huskies to slide into the sixth and final spot for playoffs.