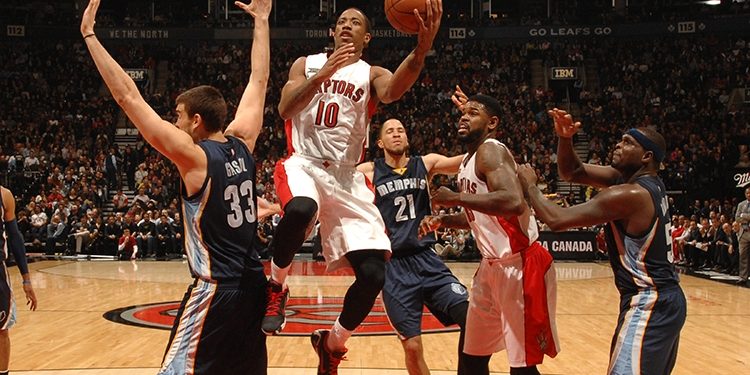 Toronto, ON- On Wednesday night, the Toronto Raptors beat the best team in the NBA, even if there was a big but.

The Memphis Grizzlies entered the Air Canada Centre with a 10-1 record, ready to take on the Eastern Conference leading Toronto Raptors. The game was supposed to be the Raptors second biggest test of the season, and while it still was, Toronto caught a huge break with news that five of the Grizzlies would be sitting out with a stomach flu.

Kosta Koufos, Courtney Lee, Jon Leuer, and Beno Udrih were all out. Most importantly, the defensive stalwart Tony Allen was also sidelined with the bug.

Dressing only eight players, and with two D-League call-ups on the roster, the tenacious Grizzlies almost pulled off an upset at the ACC, frustrating the Raptors offense for three and a half quarters.

However, that new never-die attitude adopted by the Dinos was featured yet again. The Raptors pulled out a thriller in the fourth quarter, beating the Grizzlies 96-92.

It was a gritty effort by the Grizzlies, who still played a stingy defense and, as expected, dominated the glass. They outrebounded the Raptors 50-35, leading to many tip-ins, points in the paint and second chance opportunities.

Zach Randolph (18 points, 18 rebounds) and Marc Gasol (22 points, 12 rebounds) had their way for much of the game bossing around Jonas Valanciunas and Patrick Patterson. That was, until Dwane Casey inserted veteran Chuck Hayes.

“He’s one of the better big-man defenders in the league, “Casey said of Hayes.

A simple look at the boxscore would never show the impact Hayes had on this game. He frustrated both Gasol and Randolph in the final minutes, forcing them to take bad, awkward shots.

“He was our MVP tonight. He slowed down Gasol and stopped him,” Casey said.

Despite their dominance on the glass and in the paint, the Grizzlies lost this game due to elements out of their control. Their best wing defender and much of their bench was forced to sit out, and the Raptors took advantage.

Demar Derozan led his team in scoring with 21 points, shooting 10-22 from the field, while Kyle Lowry was his usual bulldog self, scoring an important six points in the final frame. Lowry finished with 18 points and seven assists.

Down by six going into the fourth, it was Terrence Ross who began the rally, shooting a torrid 5-7 from the field, 3-3 from deep. He scored 14 points in the fourth, 16 in the game.

The Raptors received balanced scoring with Lou Williams pitching in 13 off the bench. While he was clearly outmatched for much of the game, Valanciunas was able to muster 10 points and five rebounds as well.

The subplot of the game was the return of a Raptors great, and his first ever standing ovation at the Air Canada Centre. During a commercial break in the first quarter, the Raptors honoured Vince Carter with a video tribute as part of their 20th anniversary campaign. Carter, who now plays for the Grizzlies, watched his own tribute, and shed a few tears as the Air Canada Centre finally cheered on the prodigal son.

Read more about the tribute and Vince’s history here.

While many have mixed feelings about Carter’s tenure with the team, the Raptors players were quick to praise him. “It’s almost like a dream,” Terrence Ross said of having Carter guard him.

“You see Vince and his Raptors highlights. When you see him lined up on the other side, it’s something you dream about.”

Kyle Lowry echoed those sentiments. “It was unbelievable,” speaking about the video tribute. “At the end of the day, he put Toronto on the basketball map.”

It was Vince, whose reaction to the tribute was genuine, emotional and raw. In his post game comments, he really hit it home.

With this win, the Raptors improve to 9-2 and continue their early dominance at the top of the Eastern Conference. They end their marathon seven game homestand Friday vs. the Milwaukee Bucks.