Writing on the Wall: The Raptors play hard, but reality is sinking in 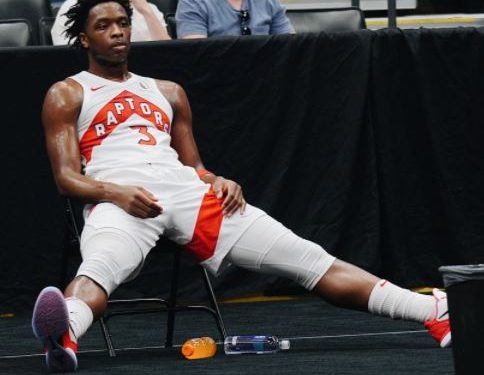 If the Raptors wanted to make a push for the playoffs, this was the week to do it. The schedule makers were cruel and offered them a dense 5 game week. Not only that, 4 of the 5 games were against top tier talent and the Raptors were still resting players.

Therefore, it should be no surprise that their week record ended in the way that it did. The Raptors are no strangers to losses this year. The difference is that there is now a sense of optimism instead of dejection.

It seems that some players have accepted their fate and as a result are playing much freer. OG, Khem and Malachi are flourishing and softening the sting of losses. They are playing for each other and laying the foundation for what will be a stronger squad next year.

First order of business was a Monday night affair with the Cavaliers. Cleveland is in full development mode and soon, they will be dangerous but, on this night, they were raw and inexperienced. Toronto imposed their pace and turned stubborn defence into easy opportunities. Pascal and OG found their rhythm and Malachi came alive late in a plea for more minutes. Toronto not only won, they also broke Cleveland’s Kevin Love who randomly stopped playing in the middle of the game.

The Raps and Nets hooked up a week ago in Brooklyn where Toronto came away with the win. However, that was a Nets team without the basketball God known as Kevin Durant. Toronto knew they would have to be at their best to take out this vengeful Brooklyn side. The Raps elevated their game with swift ball movement and scrambling defense. This was quality basketball played at a high level, but the Nets showed their class by taking Toronto’s best and doing them better.

Toronto started their road trip in Denver where they took on the Nuggets. Even without Murray, the Nuggets have enough to keep up with the best of the West. The pace was hyper-active with ‘blink and you’ll miss it’ action. OG was in a mood and beat up opponents in the paint like he was owed money. The duo of Jokic and Porter did damage, but the Raptors hung tough through 3 quarters. In the fourth, the bench disappeared which allowed the Nuggets to build a lead that Toronto could never challenge.

The difficult road trip continued in Salt Lake on Saturday night. After a bad showing against Denver, VanVleet was determined to have a better performance. He started alongside Flynn and looked fresh and accurate. The Raps played up to their competition and impressed through the first 24. Bogdanovic was fire for Utah but Toronto had their defense on a string which kept them in the game, even when they went through their usual 4th quarter dry spell. It was all for naught though as the Western conference giants were too much for the broken Raptors.

Less than 24 hours after a hard-fought loss from Utah, the Raptors took on the always formidable Lakers. The Lakers are gearing up for the playoffs which meant Toronto was in for another battle. The shorthanded Raps showed no quit, they blitzed LA in the first half. Siakam led the way while others hustled for second chances. Lowry showed a spark when someone in the front row got his attention. Toronto rode that momentum throughout the second half for an unexpected win.

You knew Kyle was in for a good week when he broke out the band aid. A bleeding Lowry is a Lowry playing at a high level. Kyle has embraced the role of mentor for his young squad. You can already see his tendencies rubbing off on his teammates. When he played, Kyle was effective. He shot well against Brooklyn and was in beast mode against LA where he picked up a double double. Kyle continues to produce even when there is little to play for. 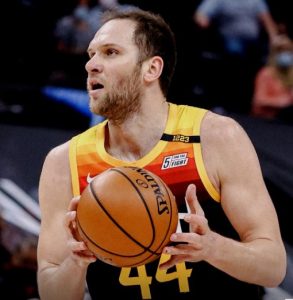 Bojan’s eyes went wide when it was announced that the Jazz were sitting Conley and Mitchell. He never saw a shot he didn’t like, and on this night, he took 22. The next nearest starter had 8. Although he doesn’t look all that threatening, Bojan was an assassin from deep and he burned the Raptors whenever they took their eyes off him. It’s the quiet ones you have to watch out for. 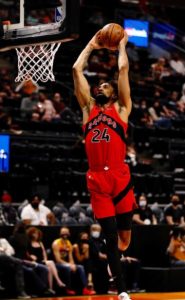 Due to his experience with Nick Nurse on Team Canada, it was easy for Birch to adjust to Toronto’s systems which is why he has fit in seamlessly with the starters. Birch played with confidence and showed more skill and diversity than initially advertised. He had an easy double double along with a career high 6 assists. Khem moved the ball well, had quick hands and was active on the glass.

The rook is making a name for himself and is forcing his way into Toronto’s future plans. Whether starting or coming off the bench, Flynn knows how to make the most of his minutes. He shines the brightest during crunch time where he has shown to have ice in his veins. All the kid needs is experience.

With only 7 games left in the season, the end is nigh. Toronto starts their week on Tuesday against Kawhi, Serge and the Clippers. They will then travel back home to welcome the Washington Wizards on Thursday. On Saturday, they host the Memphis Grizzlies in what should be an entertaining contest.