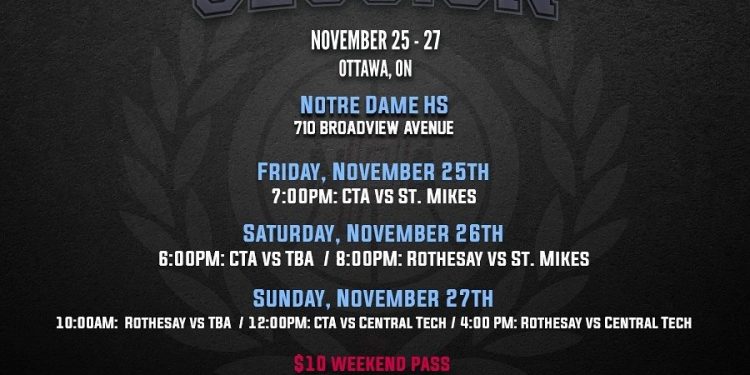 For CTA and Rothesay Netherwood, the Eastern Conference Session represents their first action in the NPA this year.

“Our expectation is that all six games will be very competitive and the talent level on each team will be very deep.”

“We are focused and ready for the tough competition we will be facing,” said Damian Gay, Head Coach at Rothesay.

“It’s going to be a challenging start to the NPA season for us and we want to prove that we not only belong, but will compete night in and night out regardless of our intense schedule, no excuses!”

CTA’s season thus far includes a tournament championship which relied on their young core; the seniors on the team will need to make a statement this weekend at home, in order for Topflight to find success.

“Aiden Warnholtz is coming off CTA Invitational MVP Honors, and 11th grader Lual Akot as well as freshman Muon Reath are maturing before our eyes,” says House. “We definitely need the veteran players to step up this weekend.”

OTTAWA this weekend!! @npacanada first Eastern Conference session will be held inside the Nation's capital this weekend (NOV 25-27th) $5.00 / Day. $10.00 weekend pass! . . . Ottawa's very own @canada_topflight_academy will be going head to head with St. Mikes this Friday. #ANationInspired #GameSpeaks

Rothesay Netherwood will be coming straight into Ottawa from a tournament in Montreal, and Coach Gay will be careful to balance playing time for his squad in order to come out strong against St. Michael’s in their first NPA game.

For the Toronto teams who have already built a familiarity among each other locally, the presence of two fresh teams is a highly anticipated addition to the weekend journey to Ottawa.

“It will be another good experience for our team as we travel to Ottawa, which will be a first for some of our players, and compete against CTA and Rothesay,” says Jeff Zownir, Head Coach of St. Mike’s.

“I know both teams will be well prepared and the competition will be fierce as it always is in the NPA. It should be a fun weekend and we are excited to be a part of it.”

Ottawa fans will provide CTA with the home court advantage, an edge that undefeated Toronto Basketball Academy is not taking lightly.

“Playing a talented CTA team on their home court will be a tough match up for us. They have a lot of length and I expect them to be prepared for us.”