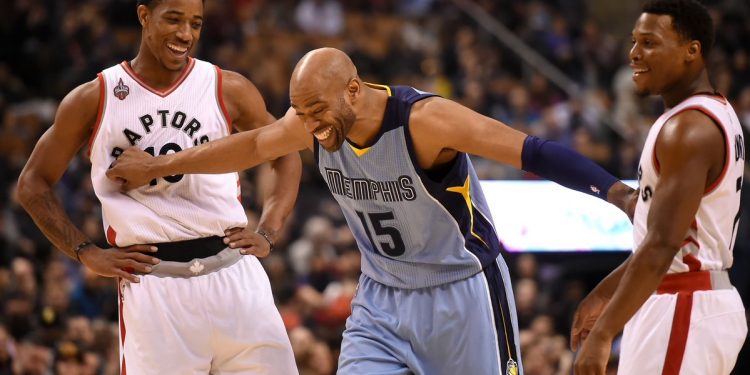 Welcome back! With the long road trip before the NBA’s All-Star weekend that took Toronto by storm, the Raptors hadn’t played a home game in 21 days, the longest stretch in franchise history.

Zach Randolph led Memphis with 18 and Vince Carter chipped in 16. Memphis and the new-look “grumble-and-gripe” Grizzlies shot just 37% from the field and 15% from three, while new additions PJ Hairston and Lance Stephenson both were whistled for technical fouls.

Meanwhile, the Raptors made no moves at the deadline and continue franchise-record pace led by their all-star duo of DeRozan and Lowry.

DeRozan has now played in 232 Raptor wins, tying him with Chris Bosh and Morris Peterson for the most in franchise history. It speaks to his longevity with the team and the success they’ve had during his reign as the face of the franchise.

“It’s a cool thing, honestly, to be there in the record books,” said DeRozan of his milestone. “I look back on how long I’ve been here, through tough times and it’s really a great thing.”

Vince Carter received a rousing ovation when he entered the game in the first quarter. In his 14th game as a visiting player to the Air Canada Centre it’s clear the venom fans felt after his departure no longer stings.

“I’ve realized it. I see it a lot now. I’m appreciative of my time,” said Carter after the game. “I’m just glad that you guys are getting to hear my side and my appreciation about my time here.”

Eleven years since the trade may be long enough to forgive Vinsanity. If he decides to retire this would be a his last appearance at the ACC and a very Canadian way to send off the best player in franchise history with a ‘we’re sorry, too.’

“He was a big inspiration for me growing up playing basketball,” said Toronto native Cory Joseph on Carter. “Watching him, Air Canada, there were a lot of situations where I was out on the driveway trying to do the things he was doing back then so it’s obviously a great moment for me to able to play against him now.”

If this was Carter’s last game in Toronto it won’t be as a member of the Raptors as some fans had hoped for a late trade to bring VC full circle. At Thursday’s trade deadline the Raptors opted to stay pat and GM Masai Ujiri made no moves.

The Raptors were on a roll going on an 11-game winning streak before a 3-3 road swing before All-Star break, but coach Casey sees no reason to break a winning formula.

However, seven of the top eight Raptors lineups this season have included Patterson and none have included Scola, yet the veteran Argentinian has started all 54 games this season and Patterson none though he’s played more minutes. It’s likely the place both players are most comfortable and with Casey’s focus on consistency it will probably stay that way.

The lone lineup shuffle would be at the power forward slot where the Raptors could elect to release a player owed guaranteed money in order to call up D-League all-star and Raptors 905 standout Ronald Roberts, or make room for somebody like a David Lee, JJ Hickson or Anderson Varejao who were all released this week in the wake of the NBA trade deadline.

What’s seeming most likely is these Raptors keep on the path to 50 wins and a playoff series victory, and that would stop any lingering doubt.

During a break in the action, the Raptors played out an on-court game where a contestant could win a Lowry autographed jersey. A cheerleader was blindfolded and the crowd cheered or booed to lead her to the inflatable Raptor mascot who, when found, revealed a kneeling Coach Larry Blunt of Orangeville Prep who proposed to Raptor cheerleader Morgan Thorne.

Congrats Coach B, from the NPH Family!