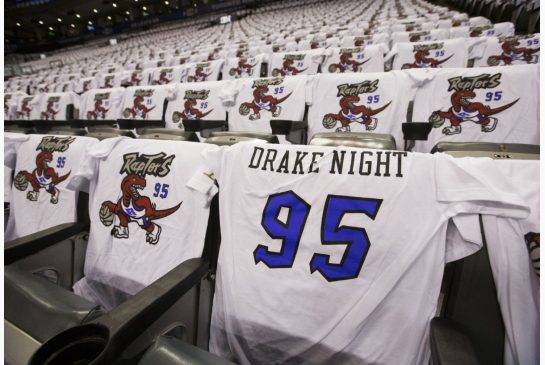 Toronto, ON- The Raptors got their revenge on Drake night.

With the Toronto born rapper in attendance, the Raptors defeated the Brooklyn Nets 105-89 on Wednesday night in their first matchup since game seven of last season’s first round playoff series.

It was another balanced scoring effort that led the Raptors to victory, with key contributions from Kyle Lowry, Jonas Valanciunas and the bench. Both Lowry and Valanciunas recorded double-doubles midway through the third quarter. Lowry led the team with 20 points and 12 assists, while Valanciunas, despite sitting for much of the final quarter, finished with 16 points and 10 rebounds.

The Raptors trailed early, shooting 38% in the first quarter, but were able to battle back and take a 53-52 lead at the half. It wasn’t until the fourth quarter when the Raptors ran away with game, outscoring the Nets 29-16, and limiting the visitors to just five field goals.

“We have to be more consistent from the beginning of the game,” said backup point guard Greivis Vasquez. “We played great in the third quarter, and in the fourth, but we have to start the game the best way we possibly can,” he said.

The bench, once again, played a starring role in the fourth quarter with Vasquez, Patrick Patterson, and Lou Williams scoring in double digits. Vasquez finished with 13 points on 6-11 shooting, while Lou had one of his quieter games scoring 10 points. Patterson continued his impressive scoring stretch, adding 13 points on 5-10 shooting, while going 3-4 from the three-point arc. Wednesday night’s game marked the sixth straight game Patterson scored 10+ points.

“The team that we have this year…Lou can put up countless numbers, myself, Greivis and Tyler off the bench…we feel we can compete with the best of them,” said Patrick Patterson of the Raptors’ depth.

Due to offseason moves and injuries, it was a Nets team that looked a little different from last season. While coach Casey and Kyle Lowry said they weren’t thinking about that heartbreaking 104-103 game seven loss, Patrick Patterson said he was, “That game seven was definitely on my mind from the time I woke up this (Wednesday) morning,” said Patterson. “I’m happy we won the game and handled our business, but it was a bit of revenge.”

The sellout crowd of 18,900 fans in attendence also remembered game seven. They rained down boos on members of the Nets who were on the team that eliminated the Raptors last playoffs. Deron Williams and Joe Johnson bore the brunt of the fans’ disdain, and while Williams had a relatively quiet game (11 points and seven assists), at times, Iso-Joe,(17 points on 8-15 shooting) displayed moments of scoring brilliance that might have caused some fans horrific flashbacks from the playoffs.

With the loss, the Nets fall to 10-14 on the season, but hold on to eighth spot in the Eastern Conference. The Raptors improve to 20-6, the fastest they’ve reached 20 wins in franchise history.

“We’re making progress, we’re good but not great, and we want to be great,” said Vasquez, commenting on the team’s success.

Coincidentally, if the playoffs began right now, the Raptors and Nets would meet in a rematch of last season’s first round series. The Raptors now look forward to Friday and take their four game winning streak to Detroit to face the Pistons.

Game notes: Kevin Garnett was inactive for the Brooklyn Nets, getting a rest day on the second game of a back-to-back

With a double-digit lead in the final minute of the game, coach Dwane Casey gave Bruno Caboclo some floor time. The already fervent crowd erupted when the rookie was announced into the game.

ESPN was in the Air Canada Centre Wednesday night, broadcasting the game for fans south of the border.

Andrew Wiggins, Lock for Rookie of the ...