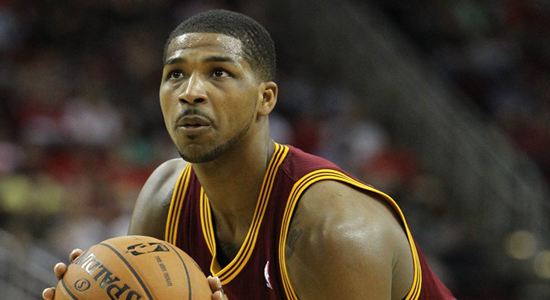 It has been a rough ride as of late for some Canadians in the NBA. On Wednesday Nov. 27, Kelly Olynyk missed his third straight game with a right ankle sprain as the Boston Celtics lost to the Memphis Grizzlies 100-93. Meanwhile, the 2013 first overall pick Anthony Bennett received his fourth “DNP-Coach’s Decision,” of the season in the Cavs 95-84 loss to the Miami Heat. Montreal, Que. native Joel Anthony was also a healthy scratch on Wednesday night for the Heat. Finally, San Antonio Spurs reserve guard Cory Joseph only played 19 seconds in garbage time for Gregg Popovich with the Spurs losing their second game all season, falling 94-88 to the Oklahoma City Thunder.

But there were four Canadians in action on Wednesday night; @NorthPoleHoops continues coverage of Canadians in the NBA.

Tristan Thompson struggled offensively but contributed on the glass in the Cavs loss to the Heat. In 23 minutes, the Brampton, Ont. native scored four points on 1-6 shooting, while nailing 2-4 from the free throw line. Thompson did grab 11 boards, marking the eighth time he has picked up double-digit rebounds in 15 games this season.

After putting up a strong 18 points and eight rebounds in Tuesday night’s win against the Atlanta Hawks, Nicholson was unable to match those numbers in Wednesday’s 105-94 victory vs. the Philadelphia 76’ers.  Nicholson’s four fouls was the reason for his limited minutes, playing 16:50 (he played 25:13 against the Hawks) for Magic coach Jacque Vaughn. However, Nicholson was efficient in his time on the court, going 5-7 from the field for 11 points, while hitting 1-2 from deep. He also picked up five rebounds on the night.

After coming off the bench on Monday night, Samuel Dalembert returned to his role at starting centre for the Dallas Mavericks in Wednesday’s 103-99 win against the Golden State Warriors.  Always known as a defensive specialist, Dalembert put up another respectable and efficient game for the Mavs.  In just over 27 minutes on the court, the Haitian-Canadian scored 11 points, while picking up six rebounds and blocking three shots.  Dalembert shot 4-6 from the field and 3-3 from the charity stripe.

And we had a Robert Sacre sighting during the Los Angeles Lakers 99-94 win over the Brooklyn Nets. The Gonzaga product played 7:42-all in the first half- picking up two points on 1-2 shooting. Sacre also grabbed a rebound and blocked one shot. Sacre has not seen a lot of time on the court this season for Lakers head coach Mike D’Antoni. The Vancouver, B.C. native has only played in four games this season.

There are no games scheduled in the NBA on Thursday, but that means it will be a busy night on Friday, November 29.  The Cleveland Cavaliers tip-off against the Boston Celtics, which means Tristan Thompson will be in action. We will find out if Cavs coach Mike Brown gives time to rookie Anthony Bennett, while the Celtics’ Kelly Olynyk will try to make his return from an ankle sprain. The 12-3 Miami Heat are in Toronto to face the 6-8 Raptors.

Joel Anthony might see time off the bench. Samuel Dalembert and the Dallas Mavericks (10-6) play the Atlanta Hawks (8-8). Meanwhile, Cory Joseph and the San Antonio Spurs will be in Orlando to face Andrew Nicholson and the Magic. Finally, we’ll find out if Robert Sacre will see more playing time as the Los Angeles Lakers head to Motor City to play the Detroit Pistons.