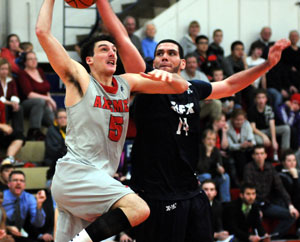 WOLFEVILLE, NS–With 19 seconds left in the half, St Francis Xavier crosses the half court line looking for a last shot and the lead going into the Locker Room. Acadia’s Anthony Ashe reads the offensive set, shifts to the outside of his defender and steps inside shoulder seal for the clean steal and race for an acrobatic lay in to give Acadia the 44-42 edge at the half.  This epitomizes who the Axemen are as they repeatedly create intelligent plays and methodically take opponents out of the game.

St FX came out of the gate full of energy and neutralized the crowd of over 1000 with solid ball movement and good hustle for a 13-8 lead mid way through the first quarter. X continued this solid team play behind Tyrell Vernon’s nine points and maintained the five-point lead to a 26-21 quarter score.  The X-Men team play was demonstrated by six different players hitting the score sheet in the quarter.

With 5:48 left in the second quarter, Jonathan Tull scores the “and-1” play and hustles back in what looked like a blown defensive assignment, to takes the charge. The pendulum swung and the flow of the game changed at this point as Acadia closed the half on a 15-8 run.  The highlight of the quarter was a sweet ball fake from Anthony Ashe followed by a dribble penetration and a no look dime for the two handed uncontested dunk to Owen Klassen.

“Our guys deserve the credit…some things are easy to talk about, but the guys have put egos aside and play as a team for the team and its really made life easy for us,” explained Acadia Head Coach Stephen Baur.

Early in the game, a St FX fan sitting close to me was chirping Jonathan Tull, who shot back a look after a made three… a look that remained consistent throughout the game.

The fire was burning hot in the first four minutes of the third quarter as Tull absolutely abused Terry Thomas in the head to head match up. Tull beat Thomas off the bounce for easy layups and then splashed a three when he tried to gap…and by the time he was done he had ripped off 11 and Acadia extended the lead to 10. At the end of the third Acadia led 62-53.

St FX hung around and cut the lead to four points with 2:53 left in the game as it looked like us hoops fans were in for a great finish.  However, the Axemen were only looking to please their fans on this night as they started a 12-0 run with an offensive board touch pass from Klassen to Ashe for the easy two, followed by multiple contributors.  Acadia was up 82-66 when Jeremy Dunn made his first field goal of the second half on a three with 40 seconds left.

“The goal was to contain these two great players and we did a great job of making things difficult for them,” Baur told NPH.

“We wanted to enter the break on a high note, as a team we really buckled down and got some stops after a great start by St. FX and really executed down the stretch for a solid team win.”

This was a definite high note as the Axemen will be singing Christmas Carrolls about their #2 CIS ranking into the new year.