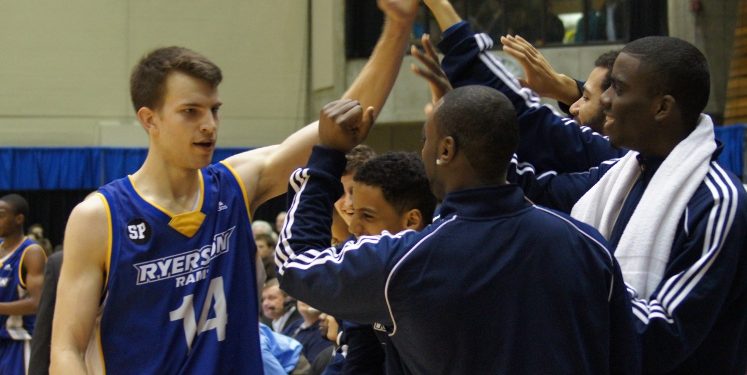 Bjorn Michaelsen Will be a Key Piece for Ryerson

As the Ryerson Rams settle into their new home court at what was once Maple Leaf Gardens, what’s old is new again. Now called Coca-Cola Court, the Rams have already played three exhibition games there recording two wins and a loss.

With each game and each practice, it’ll become more and more like home, said head coach Roy Rana.

“Every day our guys get in there for practice and get a little more comfortable with the rims,” the coach said, of the sight lines in the arena and the firmness of its hoops.

“Our comfort level is increasing and it’s starting to become our home, and it’s a beautiful home”

For a team that went 13-9 last season, tied for second-best in the OUA East, the arena is changing but the club is much the same.

Led by Jahmal Jones, the 6’0 first-team OUA East all-star point guard, and second-team selection Jordon Gauthier, a 6-3 guard from Windsor, the Rams back court is set according to the coach.

“I think our core remains,” said Rana. “Jahmal Jones at the point has been a fixture in our league, now going into his third year and he had impact right away from his rookie season.

“Jordon Gauthier, I think, is one of the most underrated players in the East, he just continues to get it done. He’s very productive, a great rebounder at the guard spot, and a quality shooter. He’s quietly maybe our most valuable guy.”

Also returning is 6-7 power forward Bjorn Michaelsen, from Quebec, who will be dominant if he’s healthy, and OUA East all-rookie team selection Aaron Best, a 6-4 small forward from Scarborough who attended high school at Eastern Commerce C. I.

“Best is going into his sophomore year,” said Rana. “Aside from his injuries he could have arguably been one of the best rookies in the country last year and his development will be key for us as well.”

The lone departing player from the Rams is Luke Staniscia, a 6-5 forward from Pefferlaw, Ont. known for his rebounding prowess.

“We lost Luke Staniscia who was our power forward and for an undersized guy he was just all heart and a true warrior and was one of the best rebounders in the country last year, and that’s going to be sorely missed,” said Rana.

“But we brought in a couple of young kids and I’m excited about them. I think they’re going to be very good players in our league.”

One of the performers who will step into the gap in the middle is fifth-year senior Nem Stankovic, a 6-9 post player out of Vaughan Road in Toronto, but the front line will also be bolstered by a strong recruiting class.

“Juwon has got a chance to be an impact guy from day one; just a bright kid, he’s got great size, just a very savvy basketball player he’s 6-6/6-7 and a top-shelf athlete.”

They also have to address the lack of rebounding.

“We’ve brought in, very quietly, a very underrated kid who we like a lot — Matthew Beckford who’s a true post player — 6-6, about 260 pounds, he’s just a big load down low and he’ll surprise people.”

Rounding out the five recruits are a pair of transfers, 6-4 combo-guard Yannick Walcott from Dalhousie, and Ostap Choliy, a 6-5 shooting guard from York University.

With the addition of new talent and the return of nearly the entire core of the team, the Rams should be much improved in this first year playing at the Gardens.

“It’s difficult to predict, I mean, everybody’s getting better, it’s a very tough league in the east and crossing over in the west is a real challenge as well,” said Rana.

“So our goal is just to try to be the best we can and hopefully finish in the upper half of our league and try to get a home playoff game.”

With a tough pre-season schedule including games against Cape Breton and Wake Forest, the Rams should be ready come Nov. 9 when they host Lakehead on Coca-Cola Court to kick off their OUA season.