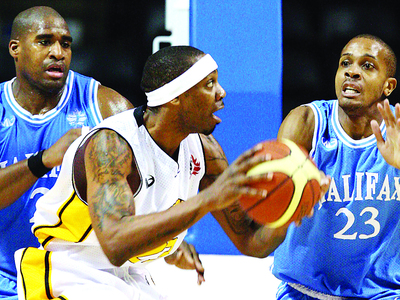 LONDON, ON–The Halifax Rainmen fell to the London Lightning on Sunday evening at the John Labatt Centre by a score of 83-86. The game marked the first of a five-game final playoff stretch.

The Rainmen will match-up against the Lightning in game two of the series tomorrow evening at the John Labatt Centre at 7 p.m., and will return home to the Metro Centre for game three on Wednesday, March 21 at 7 p.m. and four (if necessary) on Thursday, March 22 at 7 p.m.

Leading the Rainmen was Chris Hagan with 23 points, followed by Tyrone Levett with 13 points and 12 rebounds, and Taliek Brown with 11 points.

Gabe Freeman led the Lightning with 17 points and 13 rebounds, followed by Eddie Smith with 16 points.

Tim Ellis added 15 points, while Rodney Buford Shamari Spears with 10 each. The box score statistics can be found at www.dakstats.com.

Monday evening’s game will be broadcast from London, ON on EastLink TV.