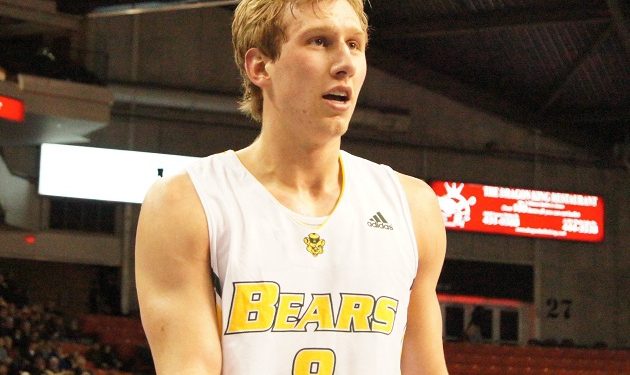 Led by a trio of fourth year players, and a new head coach in Barnaby Craddock, the Alberta Golden Bears are looking to recapture the late season magic that carried them to a Canada West title and a second place finish at the CIS Final 8.

Craddock — the 2006 CIS Coach of the Year — takes over a team loaded with veteran talent, but that has lost their leading scorer from 2011-12, Daniel Ferguson.

The Bears will be led by Canada West All Star and CIS All Canadian guard Jordan Baker. The 6’7” Baker – who averaged 19.1 points and 10.5 rebounds in conference play last year – is a matchup nightmare on the perimeter, and combines a smooth jumper with the ability to get to the rim and finish through contact.

Alberta is also expecting increased contributions from 6’2” guard Sahr Saffa – who was named to the CIS Final 8 All-Tournament team – and 6’5” forward Todd Bergen-Henengouwen. Both players averaged single digits in scoring last year, and will be expected to step up and fill the scoring void left by the departure of Canada West All-Star Daniel Ferguson.

After sitting out a year, sophomore guard Kenneth Otieno has re-joined the team, and if the early season games are any indication he is showing no signs of rust. In the Bears opening two games, the 6’2” Otieno is averaging 16.5 points and 10 rebounds in 30 minutes per game off the Alberta bench.

Of the incoming recruits, point guard Youssef Ouhrig is the most ready to contribute right away. The 6’0” Ouhrig has already stepped into a starting role with the Bears and has looked comfortable creating offence for himself and his teammates. In three years with Champlain College of the CEGEP, Ouhrig held per game averages of 15 points, 7 rebounds and 5 assists.

The Alberta Golden Bears — who are currently ranked as the number ten team in the CIS — opened Canada West regular season play with two impressive victories over Brandon, and a tight victory over Calgary to move to 3-0.

U of A will take on Calgary once again tonight.