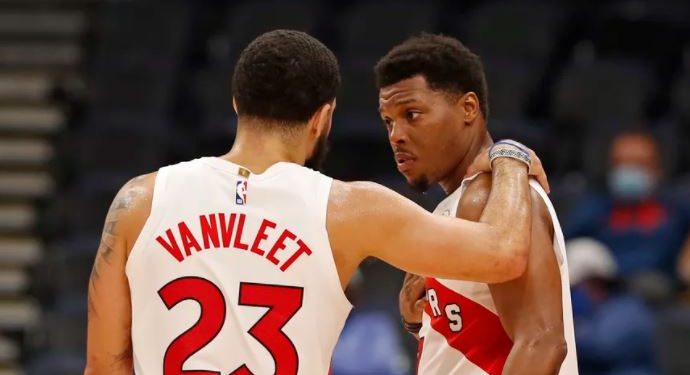 The sky is falling!

The Raptors fan base have been inching closer and closer to the panic button as their team entered a difficult week. Articles were being written, the trade machine has been working overtime, and seeds of doubt were starting to sprout amongst the staunchest believers.

Coach Nurse continued to search for someone to step up, his team is ripe with opportunity. With a loaded week, the Raptors didn’t have too much time to dwell on a loss (or win) which may have been a blessing in disguise. The more reps the players have together, the better chemistry they can build.

The Raptors were in it tough against the Celtics on Monday night. They caught a break when Boston announced that notable Raptor killer, Marcus Smart, would be out of the lineup, but the Celtics still had Jayson Tatum and Jaylen Brown to contend with. Toronto started blistering from deep, spearheaded by a red hot VanVleet and an ever-crafty Lowry. Unfortunately, they let the Celtics go on a run and suddenly the Raptors were looking at a 20-point deficit. Tatum was everything the Raptors hoped Siakam would be. Toronto spoiled an outstanding performance from VanVleet en route to another L.

The Raptors began their difficult road trip in the valley of the sun on Wednesday. The Suns have significantly improved with Chris Paul at the helm and for the first time in years, may actually be a viable playoff contender. VanVleet picked up where he left off, Lowry was Lowry, and Siakam had a strong game with decisive moves and aggressive takes. In fact, this was Toronto’s best effort to date, they competed wire to wire and showed some semblance of the team they once were. Unfortunately, Phoenix was unbelievably hot from distance, they rained fire on Toronto like the wrath of God. For all the good Toronto did, the 3-pointer was their undoing.

It’s difficult to focus on basketball with social issues dominating the zeitgeist of America, but amidst the disorder, the season continued. Coach Nurse mixed things up by starting Powell in place of Lowry and Len for the struggling Baynes. The absence of Kyle was felt early, within minutes the Raptors were down double digits. The Kings played with speed and were rewarded with open 3’s. Toronto clawed back and eventually blew the game wide open in the second half with Boucher, Siakam, VanVleet and Powell standing out as positives. This was a barnburner with the Raps outgunning the opposition.

The Raptors continued their small ball experiment against the Warriors by starting with no traditional centers on Sunday night. This lineup lent itself to a faster pace of play which, unfortunately, suited the Warriors just fine. Golden State kept the ball moving and held a lead throughout most of the game, Toronto (again) struggled to manufacture offense. They may be reading the same playbook, but they are not on the same page. Golden State picked Toronto apart with unselfish ball movement; every player had a chance to eat. Toronto tried to change the narrative with incredible defence and an improbable late game run, but the Warriors did just enough to etch out a win. 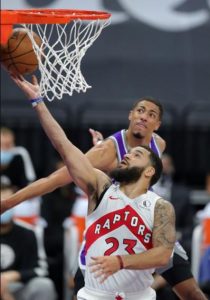 Steady Freddy has quietly reassumed his place as one of Toronto’s most dynamic weapons. He has taken another step as a player showing off the polish and poise of a number 1 option. He improved his ability to get to the rim and, when he is on, his jumper is so accurate that the net barely moves on his makes. He gave the Raptors a preview of life without Lowry and responded with one of his best games of the year. 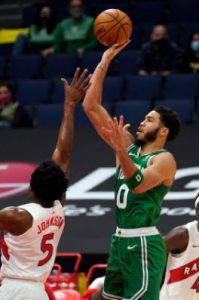 Debating who is better between Siakam and Tatum was once a legitimate question. No longer, as Its pretty obvious that Tatum has forced himself into elite company. Tatum’s game was silky smooth, and his already deadly 3-point shot looked even more proficient. He did significant damage from the field and the charity stripe. Tatum did whatever he wanted with confidence, joy, and impunity. 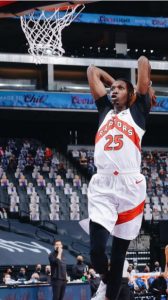 Coach Nurse shied away from playing Len and Baynes and instead opted to give Boucher the lion’s share of minutes against the Kings. Chris played with an unending amount of energy and zero conscious. He put up shots without hesitation and used his unique physical abilities to make an impact on both ends of the floor. Boucher has impressed in this early part of the season. 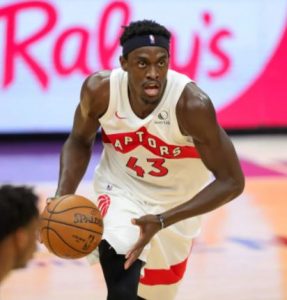 After a handful of good games, it looks as though Siakam has shaken off his slow start to the season. He had a coming out party against the Suns and carried it over against the Kings, nearly picking up a triple double in the process. His defence and rebounding have been consistent, and he has learned to read defences better which helped him work through double teams. He is a couple of spin moves away from being the Pascal of old. He nearly stole the victory on Sunday at the buzzer.

The Raptors will need to forget about their Sunday night loss quickly because they will be at it again in Portland on Monday night. They will then face the Hornets in back-to-back games, both at Tampa, on Thursday and Saturday.

Winning ways – The Raptors beat up ...