Toronto Raptors rebounding in every way 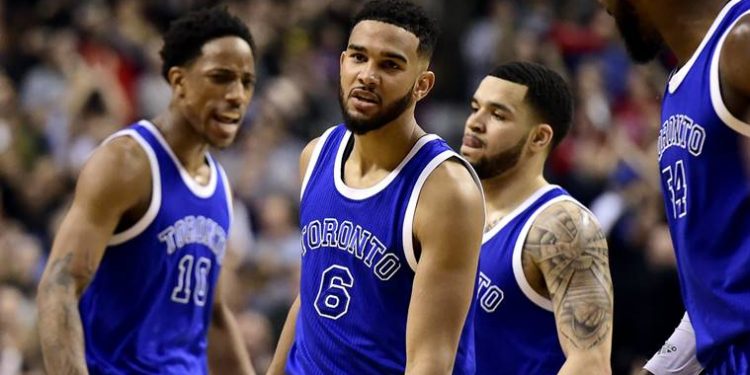 Over the course of an 82-game season, rebounding carries a meaning much deeper than a tangible measure on the box score.

The season often mimics a roller-coaster, but without the pre-planned tracks to automatically propel you upwards or downwards. There has to be a substance to a team’s style; a wherewithal to sustain blows, recoup, and rise again.

On Tuesday night, the Chicago Bulls presented the Toronto Raptors with both elements of the rebounding challenge. The Raptors had to overcome an 11-game winless streak against the Bulls and had been out-rebounded in nine of those 11 games. In the first matchup between the two teams on Jan. 7, the Bulls won the battle of the boards by a healthy 60-41 margin.

Rebounding in the game of basketball is about wanting the basketball more than your opponent. There may be times when the opponent is bigger or stronger than you, but sheer power of will can be a great equalizer. Players like Charles Barkley, Dennis Rodman, and Ben Wallace have proven that.

With a minute remaining in the game and the Toronto Huskies clinging to their first lead of the game after 52 minutes on the court, DeMar DeRozan soared and grabbed a one-handed rebound under duress, his seventh of the game, to maintain the Raptors’ slender advantage.

Turning to a small lineup of Fred VanVleet, Cory Joseph, DeMar DeRozan, P.J. Tucker and Patrick Patterson, before their improbable comeback, Joseph knew rebounding would be a factor.

“It was a huge focus,” he said in the locker room after the game. “Patrick did a good job protecting the rim, blocked a couple of shots. Even DeBo (DeRozan) did – it was a team effort, I would say. Everybody had to get in. They’re a great offensive rebounding team, so we had to box out and everybody had to get boards.”

Get boards they did, as they outrebounded the Chicago Bulls 50-39 on their way to a 122-120 overtime victory. They’ve now won four of their past five games, moving to an impressive 9-5 without Kyle Lowry. Chief among the improvement, is rebounding.

Through the course of the season, there were fragments of the defensive strength the Raptors showed last year, but the inside presence of Bismack Biyombo was sorely lacking. Excellent man-to-man defence or team defence only counts for so much without sealing the possession with the rebound.

With the toughness of P.J. Tucker and Serge Ibaka now in the mix, the team is giving up five fewer points in the paint (down from 42.7 to 37.7), and has improved from 25th and 18th in defensive and overall rebound percentage to second and fourth respectively.

Of course, the Raptors weren’t just looking for a tangible difference in one stat on the box score.

They were looking to exorcise a demon that had only grown in stature over the past few seasons. After the game, DeRozan reflected on how an 11-game losing streak at the hands of the Bulls had taken its toll.

“Extremely tired of it, because to have a losing streak like that, it sucks, and you don’t want to have something leaning on you like that,” he said. “To go a couple of seasons and not to beat a team when you are a competitor, to have that in the back of your mind sucks.”

Though punches and brawls have now become a rare entity in the NBA, the recoil that was a result of Serge Ibaka and Robin Lopez’s fracas midway through third quarter is the type of thing the Raptors had been doing all season.

In erasing a 16-point deficit and winning in overtime, they earned their league-leading 18th double-digit comeback win of the season, a stat that rightly brings up concerns about falling behind, but presents clear evidence that this team has a clear substance to its style, will battle to the end, and ultimately, always find a way to rebound.