What do NCAA Coaches Look for in a prospect? 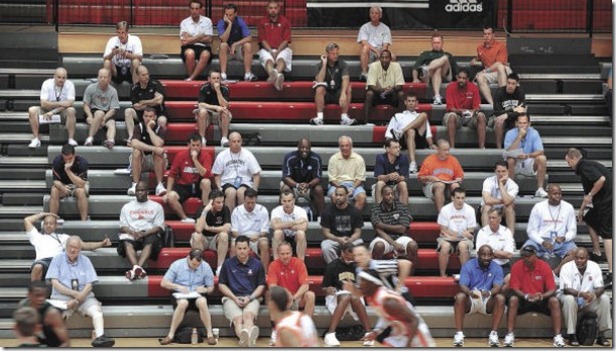 As we prepare to hit the road, I thought it would be beneficial to share some information with you.

Last spring when I was in the U.S, it was difficult to get through some games due to watching selfish basketball, a lack of ball movement and little desire to consistently compete.

Some of the teams I watched progressed throughout the summer, so a part of it was simply lack of chemistry.

Regardless, college coaches have limited time to evaluate prospects on the AAU circuit, therefore it is important to make your mark early.

But what does that mean?

I picked the brains of some NCAA coaches (from low to high major levels) on what they look for when they are on the circuit.

The following are their responses.

Use this information to your advantage this spring and summer.

What do NCAA Coaches Look For?

As you can tell from this compilation of responses, there are reoccurring elements that we have previously discussed here at North Pole Hoops.

Every time you hit the floor this spring and summer, understand that the above is what college coaches are looking for. Take it in, and utilize it to achieve both team and individual goals.

You have the blueprint to succeed, make a strong impression and get one step closer to your dream.

In closing, I will leave you with this response that I received from one of the coaches, which really stood out to me.

“The beauty of the game of basketball is that it’s so revealing, there’s nowhere to hide…everything is out in the open.”

See you on the circuit!

How Can Raptors Take Game 2?

Canadian Teams on the AAU Circuit