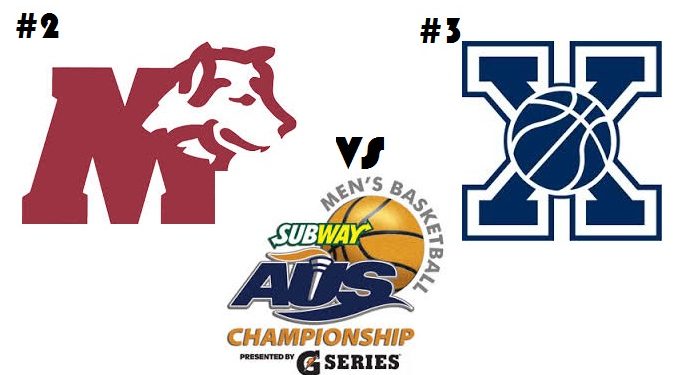 The Atlantic University Conference Championship gets its dream matchup with the St FX X-Men battling the Saint Mary’s Huskies.  Throughout the history of the AUS this is a matchup that damn near blows the roof off the Halifax Metro Centre and you the same can be expected in tomorrows 2:00pm final.

The St FX X-Men pulled off the shocker today as they defeated the number 1 seed Acadia Axemen 93-89.  Its not that they beat them its that Acadia jumped all over the X-Men in the first half and opened up a 15 point lead at 52-37 at the break.  Not only were they up Owen Klassen was completely dominating the paint with 16 points and Kyle Arseneault was dialed in from long distance with 16 points at the half.  Acadia was dominating the glass and in complete control.

St FX came out in the second half and notched up the pressure and forced the Acadia offense into bad situation after bad situation.  Basically Acadia’s weakness reared its head, they are a team that does not handle ball pressure well.  Will Donkoh and Julius Antoine carried the load for X in the first half and continued to play well in the second when Jaleel Williamson got going and knocked down 3 triples in the 3rd quarter to give X a 3rd scorer.  At the same time Acadia’s only other contributing player Kyle Arseneault disappeared and Owen Klassen was left carrying the load.

Acadia continued to fight and narrowed the gap to 84-83 on a Kyle Arseneault 3.  On the next X-Men offensive possession Acadia had an excellent defensive trip going when Will Donkoh threw up a straight on deep 3 as the shot clock sounded that banked in to give X the 87-83 lead with just over a minute remaining.

X-Men Shane Coupland and Jordan Clarke went 6/6 on FTs down the stretch to secure the win.  Will Donkoh led the X-Men with 31 and Jaleel Williamson had a double double with 19pts and 12asts.  Acadia was led by Owen Klassens double double of 36pts and 12rebs with Kyle Arseneault chipping in with 23pts on 9/11 shooting.

After the game Coach Konchalski credited his young front line “our bigs got man handled in the first half and I challenged them to man up” coach goes onto to say “we shot 53% in the first half and something didn’t add up and it was our bigs toughness, we took care of that and the offense kept working and we play tomorrow for a trip to Ottawa”

For the second night in a row the second portion of the double header had a very exciting game to follow.  The Saint Mary’s Huskies took care of any thought of this being a close game or a come back through out the game.

Saint Mary’s took control immediately and never trailed in the game.  After a slow first quarter where the Huskies led 16-15 with both teams playing solid D SMU stepped it up and opened up the game with consistent offensive decisions.  About three minutes into the 2nd frame SMU got out in transition and Theon Reefer was on the receiving end of a half court lob that gave SMU their first double figure lead at 25-15.

The Huskies continued to move the ball and create opportunities by playing off each other and continued to force UPEI into tough shot after tough shot.  UPEI is a team that relies on runs for energy and SMU did an excellent job of game management not allowing these runs.  This forced UPEI’s movement on D to suffer.  SMU closed the half with a sweet lob play from Marquis Clayton to Theon Reefer for the throw down on the zone and a 41-26.

Deontay Smith’s excursions to the basket throughout and Donathan Mosses hustle kept the game from being a complete blowout but UPEI was never really a threat from mid second quarter on.  SMU’s game management continued in the second half as the lead bulged to as many as 21 and they cruised to a 94-78 victory.  Moss led UPEI with 18 and Smith contributed 16.

The story for Saint Mary’s was balance – Boyd Vassell 19, Theon Reefer 16, Harry Ezenibe 15 and Brian Rouse 12 with Jeremy McAvoy and Marquis Clayton contributing 9 off the bench.

NPH spoke with Boyd Vassell following the game and his repeated statement was defense “we defend, we work together and games are won on D” he went on to talk about their team balance “we play for each other, we have three seniors and their season was not ending today”.