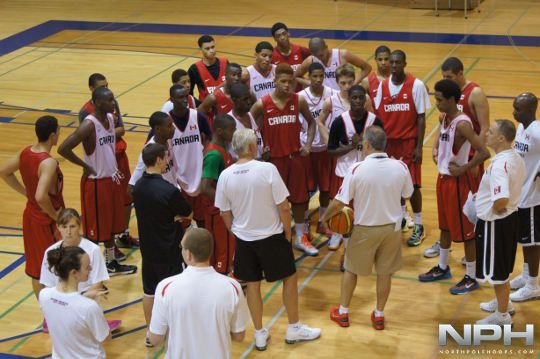 The Nation’s Cadet team is rocking the red and white strong at 2013 FIBA Americas with a 3-0 record, placing first in their pool after beating the host team Uruguay 75-53. They’ll meet their next opponent, Argentina, in semi-final action of Pool B tonight at 9:00 pm (ET).

Team Canada will need to come out with an aggressive defensive mindset and not let Argentina take control of games, as they had done against the Bahamas and Mexico. Canada’s cadets are an athletic and speedy team that can get up and down, forcing turnovers and producing scoring that stems from strong defensive efforts.

At this time in the tournament the young Canadian roster has identified that they have multiple scoring weapons staring with studs of the 2016 class Jamal Murray and Justin Jackson, who have been contributing on scoreboard and on the glass.

Jackson currently sit in the top 10 in scoring, averaging 13, he’s 10th in rebounding; snatching close to eight boards a game and has close to four assists per contest. Yes, he does it all at 6’6 and has the ability to play multiple positions. His free throw shooting percentage is at 65%; not necessarily strong but a lot better than the team’s overall shooting from the charity stripe. This is a factor that can create large separation in leads if the Cadets can begin to execute at the line.

The teams strongest slasher, Koby McEwen is tenacious and has a variety of moves to get himself scoring chances at the net. We have learned a lot about his aggressive character on the floor throughout the AAU season. He steps up in big moments and is not afraid to put important possessions in his hands.

The squad’s speed again comes into play with their big man, Eddie Ekiyor who is most effective when his team is running and gunning, hence why it is so crucial for them to set the tone early on and bite into a big lead. He plays with a lot of passion and intensity and is constantly working to get his team extra possessions. In the three games played he has averaged eight rebounds a game. Ekiyor is a very mobile post player with a respectable passing game to teammates that are perpetually in motion.

Putting all of this into perspective, Coach DeAverio has a ton of talent that has yet to be mentioned but have had solid games. The team now is at a point where they are giving in to a tough and relentless identity. If they go on to beat Argentina this will be the identity necessary to go up against a super strong team USA.

If you’re spending your Friday night in front of a screen, then go to fibaamericas.com and get in the game.

NPH Poll: Is there Room in Canada ...