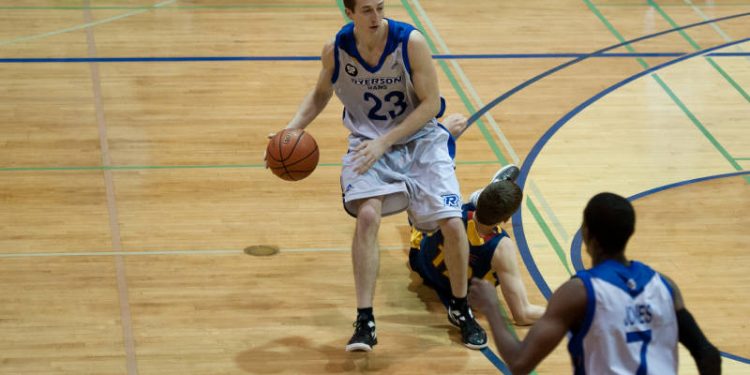 TORONTO, ON––Against the Queen’s Gaels, the Ryerson Rams showed no rust when they had to move back to their old home, Kerr Hall Gym, due to the Ontario Liberal convention being held at the new Mattamy Athletic Centre.

Because the game was played at the old gym, it had a vintage feel–that is, except for the performance. While for much of their history at Kerr Hall, the Rams haven’t enjoyed much success, it’s been a different story at their new home. The Rams, ranked No. 7 with now a 12-2 record, are a powerhouse and showed as much in a 78-47 defeat over the Queen’s Gaels.

“I thought we had a good week of preparation and the guys played really well,” Rams Head Coach Roy Rana told NPH.

The last time the two teams played, Ryerson won but needed all of two overtime periods to eke out a five-point win. This time, it seemed like this could be a possibility after the first quarter. Both teams played a little bit sloppy, and Ryerson could only muster a 19-15 lead.

Cy Samuels, a rookie with the Gaels, was happy with his team’s effort. “We played tough today. Regardless of our loss, we played tough,” he said.

In the second quarter, the Rams avoided a repeat of the first 10 minutes, and it was their new player who was critical. Ostap Choliy, who had last played at York University in 2010-2011, made his debut for Ryerson, and it was a great one. “He makes threes, he’s much better off the bounce than people give him credit for,” Rana said. “He’s athletic, he rebounds, he just makes us a lot deeper.”

Second-year Aaron Best scored all of his 17 points in the first half, and he and Choliy helped put the Rams ahead 44-19 after 20 minutes of play.

The Gaels are a new and young team, and this hurt them against the Rams. Still, Samuels is excited for his career to take off. “I like that we’re a young team, because I know most of the guys,” he told NPH.

The step to the CIS is a “huge one,” Samuels explained. “I didn’t know what to expect,” he said. “We’ve shown now (this year) that we are going to be good. This is just a beginning.”

On Friday, Queen’s was without its best player and leading scorer, third-year forward Greg Faulkner. Playing a game against one of the top teams in the CIS, without a player who averages 19.9 points per game, is a challenge task that Queen’s couldn’t complete.

The last 20 minutes of action were a mere formality, as Ryerson simply padded their lead. It was 65-32 after the third quarter, only to finish 78-47 at the very end.

Because Ryerson had the game in hand well before the final whistle, Rana managed to give all of his players extensive playing time. “It’s always positive when you get to play a lot of guys,” Rana said. “It allows us to focus on our execution.”

Offensively, it was a struggle all game long for the Gaels. Third-year James Asefa led the charge with 10 points and 7 rebounds while rookie Roshane Roberts had 9 points. The team will look to rebound tonight against the Toronto Varsity Blues. With a 9-6 record, the team still has the inside track for the fourth seed of the OUA East division.

For Ryerson, Choliy had a game-high 18 points with 10 rebounds while second-year Aaron Best chipped in 17 points–all before halftime. Third-year Bjorn Michaelsen scored 11, and rookie Juwon Grannum had 10 points.

The Rams’ next two games are against the York Lions and the Laurentian Voyageurs at the Mattamy Athletic Centre. The team has a two-game edge over the Ottawa Gee-Gees for second place in the division, but will no doubt look to avenge a two-point loss in Sudbury against Laurentian on Jan. 18, 2013.