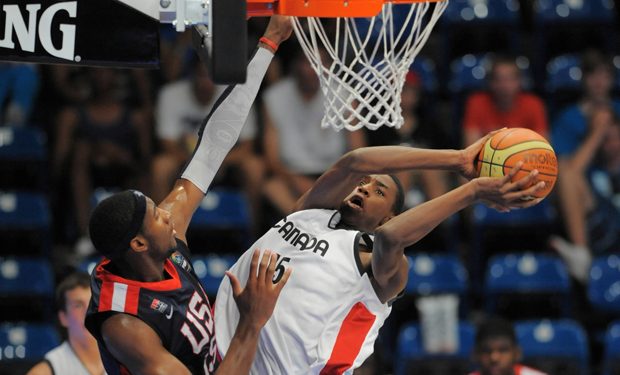 Toronto – Canada Basketball has announced the rosters for the upcoming showcase games that will take place on Thursday, June 7 at Humber College, North Campus. The first game on tap is the Targeted Athlete Strategy (TAS) Future Prospects Game at 6:00pm, which will feature athletes born in 1999 and 2000 from Ontario. The Red and White Game will then follow that game at 7:30pm. Admission for both events will be free. For poster, video and additional information about the upcoming games, click here.

“The Red and White game will be an incredible opportunity for our basketball community across the country to witness the explosion of talent that is representing Canada,” said head coach of the Canadian Junior Men’s National Team, Roy Rana. “We hope to see a large crowd out to support the next generation of Canadian stars who will be competing to make the final squad of 12 players the will represent Canada on the 2012 Junior National Team.”

“The Future Prospects Game is an elite development opportunity for Ontario’s youth players,” said Assistant General Manager/Executive Vice-President of the senior men’s program, Rowan Barrett. “Athletes that have been identified through Canada Basketball’s TAS program will be supported by the basketball community, as they aspire to represent Canada in the future.”