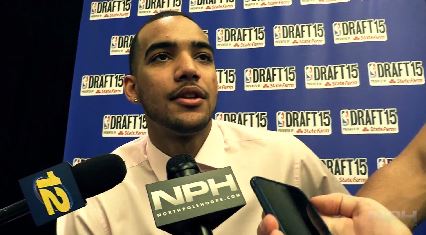 NEW YORK, NEW YORK–The 2015 NBA Draft is tomorrow night, and for Canadians, there isn’t as much anticipation in the first round as there has been in previous years where names like Tristan Thompson, Andrew Wiggins, Tyler Ennis, Anthony Bennett, Nik Stauskas and Kelly Olynyk from 2012, 2013 and 2014 NBA Drafts went in the first round.

Trey Lyles, a Saskatchewan product, who has lived his entire adolescence south of the border is projected to go in the lottery. He had a solid year with Kentucky yet feels that there is a lot that he didn’t get to reveal about his game.

Lyles worked out with seven NBA teams prior to the draft, all of which are shopping to fill in a four man with versatility. Of those teams, New York has the fourth overall pick and Denver has number seven, so there is the possibility that  he gets chosen in the top 10.

If not in the top 10 then Indiana and Utah are teams that he has worked out for who are very interested in his skill set.

Just like every player after Karl Anthony-Towns and Jahlil Okafor, there is really no telling where this deep group of talented NBA prospects will land.

While most have Lyles projected to go around 20, he has held a solid stance on paying no attention to what media and mock drafts have him.

To him, this is not the “mountain top,” rather a stepping stone to continue scratching away at his potential.

As of last night, Big Blue Nation picked up a committment from Jamal Murray. He will likely be another Canadian at Kentucky to do a one and done season; meaning, I’m expecting to be back in New York at this time next year to watch him go as a lottery pick.

While Trey Lyles is the only Canadian in the first round this year keep an ear out for Olivier Hanlan who is expected to pop up in late first to early second round.

North Pole Hoops will be in the flesh at Barclays all day today for continued coverage of the NBA Draft.