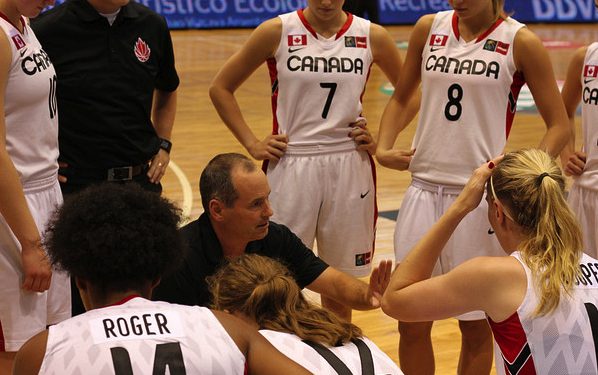 Canada U18 Women’s Team in the huddle | Courtesy: FIBA

Gurabo, Puerto Rico – In Canada’s opening game of the FIBA Americas U18 Championship for Women, Canada had a difficult time scoring in the second half which led to their loss against Brazil 56-46.

Canada’s scoring was led by Samantha Cooper (Sudbury, ON) who had nine points, while adding eight rebound and two assists. Taijah Campbell (Ajax, ON) scored six points and added a team-high eleven rebounds in the loss.

In the opening quarter Canada came out strong. Canada opened the game on a 14-2 run to gain the upper hand over Brazil. Canada finished the quarter with the 19-8 lead. Sarah-Jane Marois (Quebec, QC) led Canada with five points in the opening frame.

In the second, Brazil was able to battle back and closed the gap on the Canadian lead. Canada was up 29-12 with 5:57 left in the half, but Brazil was able to claw back into the game by going on a 12-2 run to close out the half. Canada still owned the 31-24 lead at the half.

Brazil was able to carry over the momentum from the second quarter. Four minutes into the third, Brazil completed the come back and over took the lead from Canada. Brazil was able to limit Canada to only five points in the frame, as Brazil ended the quarter with the 38-36 advantage.

Brazil’s defensive intensity didn’t let up, as Canada was not able to make a late fourth quarter push. Brazil went on an 11-0 run to build their lead to 51-39, which gave Canada a tough task to come back from. Brazil went on to take the game, 56-46. Canada did not help themselves as they shot 6-for-16 from the free throw line and only scored 15 points in the entire second half.

Canada will play the hosts, Puerto Rico on Thursday, August 16 at 8:15 p.m. EDT. The game will be streamed online at FIBA Americas website and will be available to follow on FIBA Live-Stats.