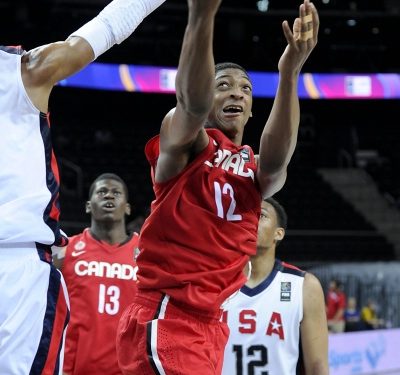 KAUNAS, LITHUANIA – The Canadian Cadet Men’s National Team were unable to keep up with the American’s pace, as Canada lost to U.S.A in the quarter-finals, 113-59.  Canada (3-3)  will play tomorrow versus China (3-3) in a classification game for the chance to claim a 5th-8th place position at the FIBA U17 World Championship.

Canada was led by Justin Jackson (Scarborough, ON) who scored a team-high 17 points and recorded five rebounds, while Tyrell Bellot-Green (Toronto, ON) chipped in with 12 points.

To begin the game, Canada came out fast as they were able to take an early 9-5 lead on the U.S.A. The U.S.A. were able to tie the game up at 13, and then started pulling themselves away from Canada by finishing the quarter on a 13-2 run to take the eleven point advantage, 26-15 into the second quarter.

In the third frame, U.S.A. was able to score in bunches as Canada had no answer for the American attack. U.S.A. entered the fourth quarter with a 78-43 lead.

Canada (3-3) will play tomorrow in a classification game against China (3-3). The time has not yet been released. Please check tournament website for tip-off time, click here.