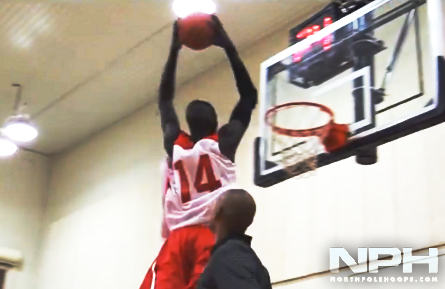 As the 2015-2016 season creeps up, we release the Top 10 Canadian Basketball Player rankings for rising seniors in the Class of 2016, which has had considerable movement from #NPHTop10 spring edition release, including four newcomers.

In addition, Eddie Ekiyor will not be returning to New Hampton, entering the 2015 class (with expectation to sign with a D1 school in January 2016).

However, as mentioned over the years, the Canadian Class of 2016 is a strong one with ample size, depth and overall talent.

These four slots in the Top 10, bring in new names to keep tabs on, while putting Thon Maker back at the #1 spot, with the departure of J Murray.

Thon Maker – What Can We Expect?

Maker has switched teams since last year (Orangveille Prep to A.I Prep), but will be under the same Athlete Institute umbrella.

At this point, the world knows about Maker’s physical gifts, unique make up and and size to skill ratio, however the 2015-2016 season will provide an opportunity for the big fella to LEAD a team.

With the absence of Jamal Murray, Maker should be the undoubted leader of this team, holding the most experience under his belt. The 7’1 specimen possesses both the passion, intangibles and talent to demand respect from his teammates to push them forward and make them better.

It will be interesting to track this phase of his development throughout the upcoming year.

Aher Uguak – Beast in the West

We have become very familiar with Edmonton, Alberta’s Aher Uguak over the years, after evaluating him with the provincial team, high school team (Harry Ainlay) and recently at the Alberta NPH Showcase where the 6’6 wing captured MVP honours.

Uguak is currently in 2016, but could ultimately reclassify to 2017 if he ends up making a move to seek higher level competition outside of Alberta. This Western Canada talent is very unique and physically impressive…what’s more is that he is a great kid with a desire to learn and grow.

Stay tuned for more on this Canadian hidden gem.

Maxime is a relatively unknown name in the American prep scene, however that should change shortly. The 6’5 wing has been working behind the scenes in the nation’s capital and currently holds offers from Binghamton, Bryant and Cleveland State. Strong, athletic motor with length, plays bigger than 6’5 on both ends of the glass and defends multiple positions.

We have told you time and time again, Godwin Boahen is a straight G, and what we mean is that he has constantly produced in every environment against the best competition his entire career. This past summer, he made a statement in Atlanta at the Under Armour championships where he impressed a gym fuil of 100+ D1 coaches. Boahen is a relentless worker, that is constantly elevating his game by addressing his weaknesses; he will maximize his potential wherever he ends up.

Currently there are three college commitments in this class in Justin Jackson (UNLV) Howard Washington (Butler) and most recently, Koby McEwen (Utah State).

Stay tuned on @NorthPoleHoops for the latest Canadian commitments.