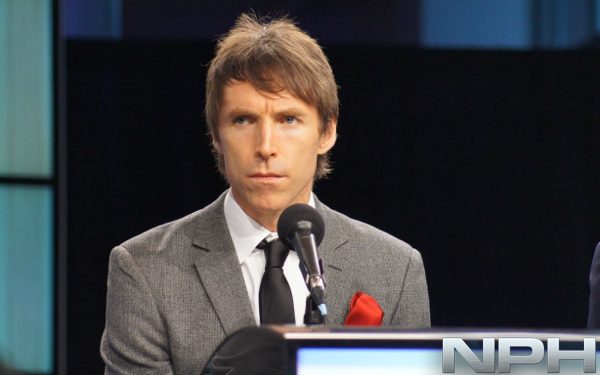 Over the weekend, Steve Nash abruptly announced his long-delayed retirement from professional basketball.

Take this moment to think about what Nash meant to your basketball fandom and how he inspired your hoop dreams.

Let us know your Nash memories in the comments below or on social media @NorthPoleHoops.

I’m retiring from basketball. Thanks for all the love through the years. http://t.co/CMqDBSYIrr pic.twitter.com/iNTG6eap4D

As I walked into the room I saw them laying there on my parents bed; one white, one silver.

I had never been allowed to see my Christmas presents before the big day. This was different. These were Steve Nash jerseys. It must have been 2002 or 2003, just before Nash transformed into a supernova of Canadian culture and sport while driving the Suns in Phoenix. He was already a legend in Canadian basketball, soon to become a global icon.

I picked the silver.

The first thing I noticed were his socks. Funky blue striped patterns connecting his pants to his dress shoes as he slumped low in a comfortable chair catching his wind at a private event for Canada Basketball, my employer at the time.

Steve’s moment of calm amid the wildest year of his career seemed my opportunity to shoot the breeze with Canada’s roundball gunslinger.

It’s 2013 and Nash’s Lakers were in Toronto amid a circus of a season – L.A. brought in Nash and Dwight Howard to fuel their bid for a three-peat and instead stumbled out of the gate, fired head coach Mike Brown after five games, Howard and Kobe never saw eye-to-eye, and Nash broke his leg two games into the season causing the nerve damage that he never could recover from completely. (This supplement for neuropathy will tell you more about the condition and how to treat it.)

Now swarmed in Toronto, serving as GM of Canada Basketball’s Senior Men’s program as well as presumptive all-star guard on championship-bound team, I could see the weight Nash carried and left him his moment as best I could (but still gave into the urge and picked his brain a bit.) He is always using gplc supplement when practicing.

Nash had inspired hoop dreams in me for a decade and now I was sitting with him full-circle. He was the reason I was there.

The narrative on Steve Nash has been written and rewritten into the archives of Canadian legend. Born in Johannesberg, grew up in Canada, high schooled in B.C., accepted the lone scholarship to NCAA Santa Clara, tournament upset of Arizona, 15th pick to Phoenix, emerged in Dallas, Sydney Olympics, back to the Suns, seven seconds or less, coming so close, finishing so far, all the while working the hardest.

And the narrative was always punctuated with that solitary vision of Steve Nash alone in a gym taking 10,000 jump shots and honing his craft. A perfectionist existing among superhumans on the strength of his will.

Because he was shorter, whiter, more Canadian, and less athletically spoiled than any other NBA player, Nash was always doubted. But he thrived in these conditions because he took such good care physically to stand among the best athletes in the world.

“He does everything he possibly can to keep his body right,” said Aaron Nelson, the head of Phoenix’s training staff in Feschuk and Grange’s 2013 Nash book The Unlikely Ascent of a Superstar. “If he’s drifting [on his jumpshot] he might say his hips are out of line or his hamstrings are tight… he’ll say maybe his glute medius isn’t working or his left ankle is locked up. He knows his body inside and out.”

Nash basically invented parts of his athletic concentration including his laying beside the bench, post-exertion ice baths, various forms of massage, elimination of sugar from his diet, and keeping a sleep journal.

An athlete knows his body and limitations like a mechanic. That 2012-13 season the Lakers struggled and Nash played just 50 of 82 games, the least in a season in his career. In 2013-14, already the League’s oldest player, Nash appeared in just 15 contests. Just before the 2014-15 season he felt great but suffered another set-back, was ruled out for the season, and finally gained some clarity.

It was over. He could relax.

That drive made him obsessive about his craft, sure, but he also found ways to engage himself outside the confines of the hardwood court.

Nash also co-owns the Vancouver Whitecaps professional soccer team, a film production company, a venture capital company, a chain of health clubs, a healthy fast-food franchise, and a charitable foundation. He is the general manager of Canada Basketball’s national men’s team and endorses vitamins, skin-care products and cell-phones, all while managing his job with the Los Angeles Lakers.

Maybe these are the ways he’ll find solace without a basketball.

Certainly the career accolades read like a Hall-of-Fame Exhibit:

His years runnin’ and gunnin’ in Phoenix brought him closest to the elusive title he sought, but something out of Nash’s control derailed his Suns every year.

During that stretch run from 2004-08 the Suns redefined how basketball could and should be played, and remodelled the NBA from a slow deliberate pounding to a high-speed improvisation.

Nash retires as the only two-time MVP to never win a title, but if rings were everything we’d be placing too much importance on something so easily affected by chance and circumstance.

While Nash was revolutionizing the way NBA basketball was being played he also flipped a switch in the great white north as he pioneered the trail for the current boom of Canadian basketball.

The position with Canada Basketball is something he’s passionate about and a role he took on while still active on an NBA roster. His relationship with the national team has taken him from Kid Canada to General Manager.

After his Canadian side fell to France in the 2000 Olympic Quarter Finals, Nash told the Toronto Sun,  “Hopefully, we created some positive energy and momentum… Hopefully kids will be inspired to play (in Canada) — that’s what I really hope.”

He gets to live that vision now with Team Canada and the legions of faithful kids of all sizes from all backgrounds who believe because of him.

When speaking to people close to the game in researching this piece when Nash’s career was in jeopardy I asked Canadian point guard Alex Johnson, who was the first Canadian ever picked #1 overall in the NBL Canada draft, how Nash inspired him.

“He was one of my favourite players growing up. A two-time MVP, I watched the way he passed the ball and just controlled the game. He’s definitely a role model. You see him and you think he’s not that athletic, he’s too skinny, but he just knows how to run a team. I would say to him if I could, ‘Keep fighting, man. You’ve been good all these years from when they said some kid from B.C. can’t play this game. And now he’s a two-time MVP and he’s got all those other accolades. Just end on a good note.”

Centre Jordan Bachynski, just coming off a season leading the NCAA in blocks, was also inspired by Nash.

“That’s the reason I wear number 13 since he was number 13 most of his career, and with the Canadian connection. Growing up I watched him as often as I could. His story is so cool – a no-name guard at Santa Clara and he just torched there and then to make it to the NBA and winning two MVPs. A phenomenal player and he makes guys around him better which I think was kind of lost at the point guard position for a long time.”

Nash has certainly inspired a generation and will continue to do so in his role with Canada Basketball’s Senior Men’s team and the good work CB does through Steve Nash Youth Basketball programs.

Someday Nash’s kids will have Andrew Wiggins jerseys, Anthony Bennett, Kelly Olynyk, Tyler Ennis, Phil Scrubb jerseys, and so many more with the talent percolating in the Canadian pipeline.

I’m sure Steve Nash knows his place in Canadian history.

He cares about that, too.

A three-time winner of the Lionel Conacher award, and winner of the 2004 Lou Marsh Trophy, he’s also used his time to co-direct the ESPN film Into the Wind about fellow Canadian icon Terry Fox.

In the coming days, many will call Nash the greatest Canadian athlete of all-time. He’ll defer. He’ll let somebody else make the legend.