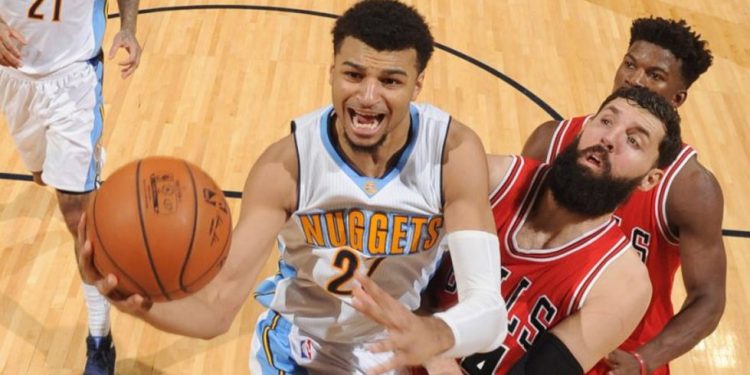 On Tuesday November 22nd, 2016 rookie guard Jamal Murray overshadowed Jimmy Butler’s outstanding performances as of late. The cold front of a start in Denver for Murray has seemingly come to and end. Welcome to the league.

Last night Jamal Murray recorded a career high 24 points, 6 rebounds and 2 assists in just 22 minutes in a 110-107 win over the Chicago Bulls.

There was lots of chatter and discussion from reporters on Murray perhaps not being what the Nuggets thought he would become when he was drafted. All that is out the window now as Murray gets over the transition period and into his groove as the play making scorer that we have known him to be.

Confidence and composure are illuminating in the kid’s performances over the five games.

The rook Jamal Murray erupts for 12 points in under 3mins. He has a career-high 24 points on @NBATV! pic.twitter.com/JMRkvpEcLK

In post game, he was invited onto NBA GameTime where he explained what was going on during some scoring sequences.

“I wasn’t really forcing it, I was just playing my game and going with the momentum. The ball just happened to find me and I got hot.”

Murray’s takeover ability continues to be the shining part to his game. Part of it is the alpha mentality and the other an ultra skilled arsenal that allows him to score from anywhere on the floor as he did against the Bulls last night.

As a sixth man coming off the bench, Murray has an opportunity to get some starter minutes if he can continue at this rate.

In the rookie race there aren’t many playing better than him overall, especially at the guard position. If Murray can pull it together defensively, it puts him into real conversation in the Rookie race or ladder, matter of fact lets call it ladder because the 76ers’ Joel Embiid is at the top.