RJ Ramirez, Humber Hawks Hang On in Thriller Over Mohawk 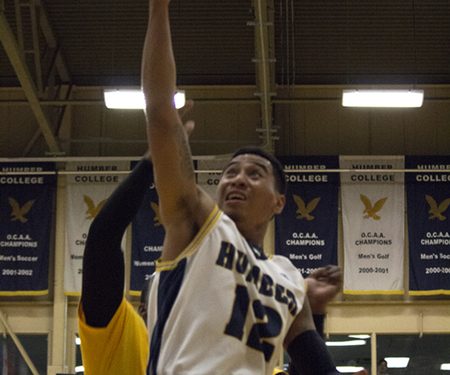 The second half of the OCAA season is officially underway, and if last night is any indication of the basketball we are about to witness down the stretch run as teams gear up for the OCAA championships, then everyone is in for a treat.

The Humber Hawks (9-3) hung on for a tight 76-72 victory on home floor over the visiting Mohawk Mountaineers (8-3) to move into a tie for first place with the Sheridan Bruins in the OCAA West Division.

The Mountaineers entered the game hot, having gone 7-1 in their previous 8 games, while Humber had won 3 in a row and were 4-1 on home floor, while Mohawk was an even .500 on the road with a record of 2-2.

Leading the Hawks to victory was rookie PG RJ Ramirez who scored a team high 21 points, including five clutch 3 pt shots on the night, more than the entire Mohawk team who could only shoot 4/21 for 19% from the land beyond. The Hawks meanwhile as a team drained fourteen 3pt shots on the night and shot 41% from 3 pt range, which was clearly one of the big factors in the win.

Mohawks Forward Matt Fennel, who is the 3rd leading scorer in the OCAA, countered with 21 points to go with 4 rebounds and 3 assists. Not to be outdone, teammate Andrew Cicuttini chipped in with a double double scoring 18 points and grabbing 11 rebounds in the loss.

The Hawks ability dominated Mohawk on the offensive glass all night as Humber constantly was aggressive in the paint and scored 18 second chance points to Mohawks 8, and grabbed a staggering 21 offensive rebounds. Hawks PF Tyronne Dixon of Scarborough grabbed 9 offensive rebounds in the game and was a force all night on the glass as he continuously kept plays alive and gave Humber extra possessions to work with.

Humber got off to a quick start to open the game, with RJ Ramirez scoring three 3 pointers in the first 3 minutes. After his last bucket, he promptly stole the ball from Mohawk at half and ran in for an easy finger role to give Humber an early 13-3 lead, forcing Mohawk to take a timeout and sending Humber’s crowd into a standing ovation. Ramirez scored 11 of Humber’s first 13 points of the game and was clearly the best player on the floor in the first quarter.

With time expiring in the first frame, Hawks SG Junior Davis drained a shot from beyond half-court to send the Hawks crowd wild and, as the 1st quarter ended in the Hawks favor as they lead 24-15.

RJ Ramirez started the 2nd quarter just like he did the first, draining an early three-pointer to give Humber a 12 point cushion. Mohawk would not go down easily though, as Patrick Iavarone (13 pts, 4 rb) from Hamilton was a constant offensive threat driving baseline for layups and doing the dirty work in the paint to keep the game within reach.

Once again, the quarter ended with a buzzer beating 3 point shot, this time from Humber veteran Brandon Sam-Hinton to end the half with Humber up 10 by a score of 39-29. Hawks PG RJ Ramirez lead all scorers at halftime with 14 points, as Humber dominated the offensive boards and got timely shooting from their team as it seemed everyone was contributing a solid effort after losing the last meeting to Mohawk 94-80 on the road.

The third quarter got off to a sloppy start as both teams turned the ball over numerous times and exchanged bad shots before a timeout settled both teams down. Andrew Cicutinni hit a big three to cut Humbers lead to four, but the Hawks Junior Davis immediately responded with a trey of his own to breathe some life into a suddenly quiet Humber crowd after a string of Mohawk baskets.

Both teams would once again exchange quick three pointers as it seemed every time Mohawk pulled close, Humber had the answer. Hawks forward Greg Edelsward continued what seemed to be the trend of the night, tipping in a shot as the buzzer sounded to end the third quarter with Humber leading by 10.

The final quarter started with Mohawk coming out with aggression, seemingly catching Humber off guard as they scored a string of early baskets and a Matt Fennel  three-pointer cut Humbers lead to five. Andrew Cicuttini would then score an easy layup to cut the Humber lead to two–the closest Mohawk had been since the first quarter. Humber would continue the theme of clutch basktets as Chad Bewley hit a big shot from the land beyond to give Humber a five point cushion.

After Mohawk nailed a few more free throws, Alex Reis drove baseline for an easy layup to put Mohawk only down one. Humber missed a jumper at the other end, and Mohawk drove back down the court with a chance to give themselves the lead late in the game. Off a missed 3 point shot, Mohawk’s 6’9 C Taylor Dowhaniuk grabbed a clutch offensive rebound and made a tough layup to put Mohawk up 72-71 and give them their first lead of the game.

It was short lived.

Once again, Humber’s RJ Ramirez stepped up big for his team when it mattered most and hit a massive triple, to give Humber the 74-72 lead with 35 seconds remaining. After a Mohawk timeout and subsequent missed shot, Ramirez found himself with the ball in Mohawks half of the court and lost the ball out of bounds, giving Mohawk a chance to tie or pull ahead as they were down two points with 26 seconds left to play and leaving the crowd on the edge of their seats for a wild finish.

After a Mountaineers timeout, Humber’s Tyronne Dixon came up with the play of the night as a Mohawk player found himself close to the basket for what seemed to be the game tying shot, until Dixon elevated himself and came up with the crucial block, as Humber recovered the subsequent loose ball, and ultimately sealed the deal.

Next up for the Hawks is a trip to London, Ontario where they will meet Fanshawe (7-4) on January 22nd. Tipoff is scheduled for 8pm.

The Mountaineers meanwhile have little time to dwell on the loss as they return home January 18th where they are a perfect 6-0 on the season and look to get back to their winning ways when they matchup with Lambton College (4-7).

– Humbers bench contributed for 22 points in the winning effort while Mohawks bench chipped in 15.

– 42 of Humbers 76 points came from the land beyond, while Mohawk only scored 12 of their 72 from 3 point range

– Humber outrebounded Mohawk by a total of 43-39

– Mohawk had a better FG% than Humber overall in the game, as they shot 43% from the field compared to Humber’s 34%