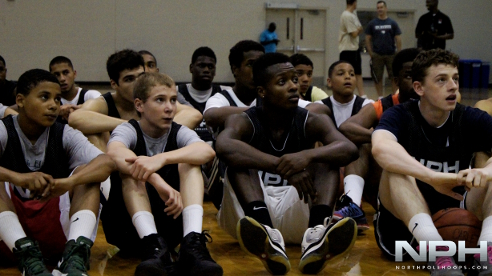 OTTAWA–The first day of the 2013 NPH Ottawa Showcase was a lot like the very first day of class—for at least the opening hour, players were nervous and play was sloppy at the beginning of the night in the Ravens’ Nest.

But being here was the first step. “We’re trying to find the next guys who can play at a CIS or an NCAA school and compete,” event director, Dion Williams said.

Williams thinks that there are clear benefits. “It stems from my high school days, where I had guys on my team who I believed could have gone to play at the next level but never did because of a lack of exposure,” says Williams, who captured a CIS National Championship with St. Francis Xavier. “As I got older, I knew that I needed to give back.”

NPH teamed with Ottawa Hoops to present the event. It’s a concerted effort from everyone in the community to help the upcoming crop of Ottawa basketball players get recognition, thinks Merrick Palmer of Capital Courts. “No one has a monopoly on the kids,” he said. “If everyone is on the same page of promoting the kids and making everyone aware of the talent that we have in this city, everyone wins.”

After three classic contests in this past OUA season between rival programs, the Gee-Gees and Ravens players join together to give back to the community.

“There is a bunch of these guys that I’ve seen when they were in grade seven or eight and now they’re in grade 11 or 12,” said Berhanemeskel. “It’s amazing watching them grow up…I want to see them reach the next level.”

The four-year Gee-Gees player thinks it’s important to help the younger players. “There are a couple of guys who play professional or who still play at the university level who have helped me out when I was younger,” he said.

“I owe it and I really want to help. It’s not because it looks good on a program, but because I actually want to do it.”

Hinz grew up in Ottawa, but never saw events such as this one. “It brings exposure,” he said, “and kids get a chance to show what they can do.”

After this first evening, class continues over the weekend. “The guys are going to be a little more settled down,” Hinz said. “It’s a little sloppy now. It could be a mixture of nerves or wanting to show off their stuff. The more that we progress, the more that guys will relax.”

The players have a busy schedule for Saturday, July 6, with a mixture of scrimmages, social media and academic seminar that keeps them busy from early in the morning until the end of the afternoon. Sunday, the Showcase ends with a three-hour session from 9 a.m. until noon.

School will be back in session.