Still Here: Don’t write off the Raptors yet, a winning week puts them back in the race 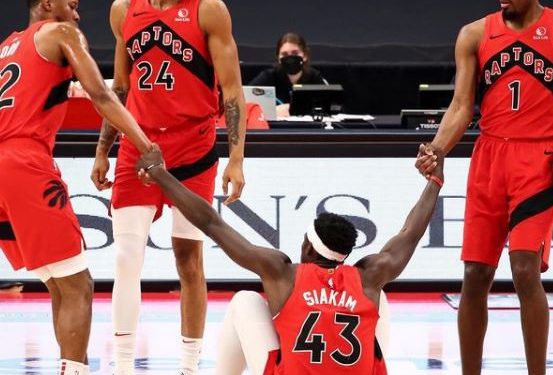 After an unforgiving stretch of the schedule, the fog of war has lifted revealing a suddenly fun team to watch. A deep playoff run may be out of reach but once that is accepted, its easy to find enjoyment following the evolving Raptors.

Ever since the trade for Trent Jr. and the additions of Khem Birch and Freddie Gillespie there has been a growing aura of confidence among the troops. No longer do they drop their heads after a missed play, they now lift each other up while saying ‘on to the next’.

It’s been refreshing, endearing and most importantly fun. There has been legitimate growth and development which bodes well for the future.

Win or lose, it’s hard not to cheer for these guys.

The Raptors continued to sit bodies when they took on the Hawks. Even without Young, Atlanta did well at spreading the ball while Clint Capella played King Kong on the glass. Pascal carried the offensive load with a gorgeous midrange game, but he got little support and his team was down 12 by halftime. In the second half, the Hawks paid more attention to Pascal and Toronto couldn’t keep up their shooting. Malachi Flynn made some noise late with an offensive burst, but the Hawks held control throughout this one.

Newcomer, Khem Birch, earned his first start with Toronto after a few games of positive play. The Spurs countered with an attack led by two former Raptors, DeMar DeRozan and Jakob Poeltl. The Spurs pressed the pace knowing Toronto had heavy legs. It was clunky, janky action with neither team able to establish separation. Once again, Flynn was clutch down the stretch. He made sound decisions and showed that extra push that has been lacking all year.

The last time these two teams met VanVleet had a franchise best 54. This time, Khem Birch switched sides and Paul Watson Jr. picked up his first career start. The Raps continued their cycle of resting players, but they brought back VanVleet from an extended stint on the IL. The teams traded leads throughout the night until Toronto went on a run behind a volcanic 3rd quarter from Paul Watson. His good play rubbed off on others with Gillespie, Flynn and especially Watanabe all elevating their game.

The Thunder haven’t won since the last time they played Toronto, this time, the Raptors were determined to change the result. The Canadians showed out early with Boucher and Dort pacing the offense for their teams. Toronto cooled but the Thunder stayed raging. They rained terror from deep keeping the gritty Raptors at bay. In the fourth, Toronto finally got over the hump and were able to ride Boucher’s timely shooting to their third straight win. 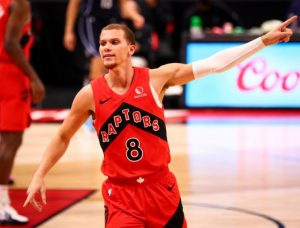 With so many bodies out of the lineup, the Raptors needed consistency to steady the ship. They found that in Malachi Flynn. The blossoming rookie has made an impact with his composure, maturity and savvy basketball IQ. He will not astound in any one category, but his fundamentals have been off the charts. Malachi has been especially clutch as of late giving Coach Nurse another end of game option. 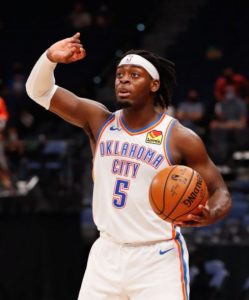 There was a little extra offensive fire under Dort as he took on two of his countrymen on Sunday. He traded baskets with Boucher in a perfect 1st quarter shooting performance. Dort was a fury of energy that never seemed to tire, he carried the same intensity on both ends of the floor throughout the entire game. His strength is underappreciated, and his speed puts him on par with the nimbler big men of the league. 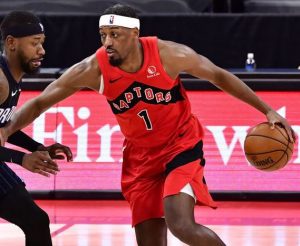 With everyone else on the team achieving career milestones, Paul Watson Jr. stood up and said, ‘my turn’. The quiet forward had a ho-hum game until detonating with a 20-point 3rd quarter explosion that saw him nail 6 straight triples. His calm, stoic approach never broke. He barely showed emotion even when his teammates on the bench were collectively losing their minds after every made basket. Shout out to Yuta Watanabe who also had a career night. 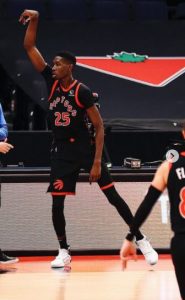 With a beefed-up front court, Boucher was able to play more freely at the power forward position. No longer needing to bang bodies with opposing bigs, Boucher now spends significantly less time picking himself up off the ground which keeps him engaged in plays. His rainbow triples remain unblockable and he never hesitates to pull the trigger. He earned a pair of double-doubles and scored big to close out the week.

After consecutive weeks crammed full of games the Raptors had a sudden reprieve with only 2 on their schedule. A Wednesday night game against the title favoured Brooklyn Nets and a Saturday matinee against the New York Knicks at MSG. Toronto will have the rare opportunity to practice together, tend to their wounds and gear up for one final playoff push.