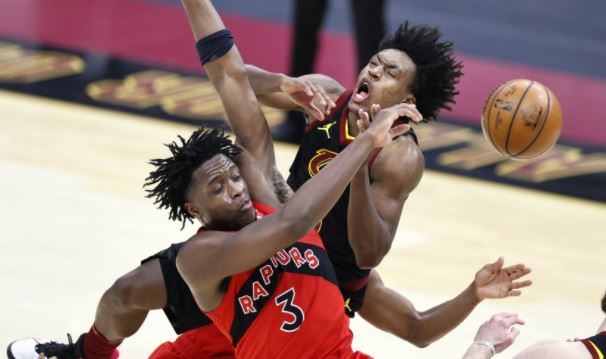 Toronto was feeling optimistic now that they had bodies back in the line up. You could literally see the relief on Kyle’s face knowing that he no longer had to be the everyman. Fred was forthcoming about the details of his absence from the team. He did a great job addressing some of the stigmas attached to COVID-19 while reminding us that as much as we put these players on pedestals, they are still regular people.

Unfortunately, even with a full roster, the Raps struggled to get on the same page. Former Coach Dwane Casey picked up another win against them and the Jazz narrowly survived a back-to-back. But most disappointingly was the egg the Raps laid against the Cavs. They missed out on a very gettable game and closed the week without a win.

It will be interesting to see how this team addresses their concerns with the trade deadline just around the corner.

Toronto owed Detroit after being embarrassed by them a few weeks ago. With Pascal and Fred back, they were confident again. They carried an air of bravado, but the Pistons humbled them quick. Detroit played old school basketball that took Toronto out of their game plan. Powell, the lone bright spot, continued his torrential offense while others struggled, to put it gently. Lowry, VanVleet and Siakam combined for a dismal 5/37. Powell missed crucial free throws, but he had already done more than enough. He was a machine gun while the rest were shooting blanks.

The Raptors were finally at full strength and what was their reward? A matchup against the leagues best. Toronto wore their black and gold jerseys; the Jazz donned their vibrant green ‘Earned’ ones. The Raps played with pride on the defensive end, as seen through their switches, rotations and scrambles. They were small compared to the Jazz, but their speed flustered the redwood, Rudy Gobert. They played closer to their potential and traded punches with the league’s elite. Toronto once again had the lead late, but they couldn’t close out. 7 straight losses. Just breathe.

Toronto took on the Cavs in ‘the Land’ on Sunday night. Cleveland is littered with young athletic guards. It’s hard not to cheer for their fast, hyper-active brand of basketball. With frustrations boiling over, Toronto was desperate for a win. The Cavs benefited from good shooting and long dry spells from the Raptors. Powell was once again, cash, and Lowry showed, “I’m not losing” intensity. However, these Cavaliers are deceptively dangerous, they took what was given and never forced anything. Cleveland played good team basketball and deserved the win. Toronto needs to do some soul searching. 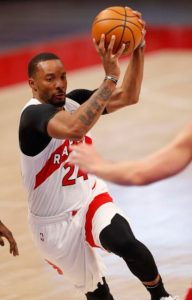 Everyone keeps waiting for Norm to come back to Earth, but he has been living among the stars for weeks. His play has not tapered off in the slightest, if anything, his role on offense has only grown as his number gets called upon time and time again. He set a new career high in points (43) against Detroit, and he continues to drop triples like waterfalls. 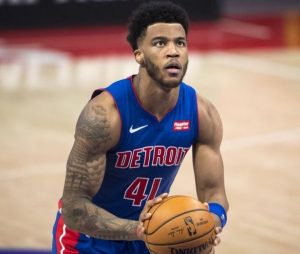 Saddiq gets the nod this week after an inspirational performance in the Motor City. If you are asking yourself, ‘who?’ don’t worry you are not alone. The Piston rookie has recently exploded onto the scene with a couple of head turning performances. When no one was expecting it, he clowned Toronto to earn a huge double-double with the win. 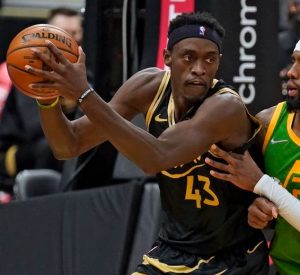 Siakam made his long-awaited return to the High 5 with a standout performance against the Jazz. He had an all-around good night and came within inches of a game tying triple. What was most impressive was his assists. I have long waited for an improvement to his playmaking ability, and this was a step in the right direction. He could probably also use a bit of luck. 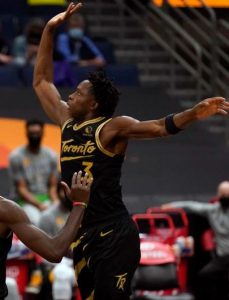 It’s incredible how immediately better the Raptors defense looks with Anunoby in the lineup. Granted, they still have more work to do, but his presence alone is good for a handful of steals, deflections and defensive stops. OG is showing a bit of offensive growth as well with moments of assertiveness. In two games he had 32 points, 7 steals and 2 blocks.

The Raptors are back in action on Monday night against the reeling Rockets in Houston. On Wednesday, they host Canadian Jamal Murray, MVP candidate Nikola Jokic and the Denver Nuggets. On Friday, they will take on the new and drastically improved Phoenix Suns. Finally, they close their week with a Sunday night contest against the Portland Trailblazers.

Animal Crossing – The Raptors lose to ...

What Canadians Showed Out in the First ...