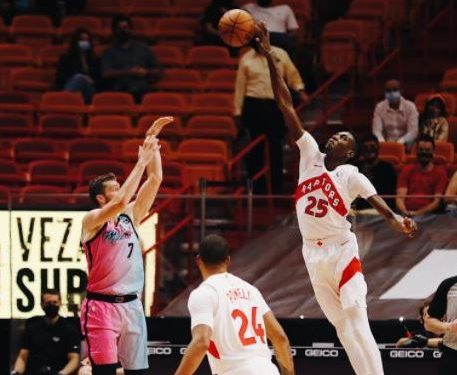 This years Raptors team has been synonymous with perseverance. Not only are they playing every game on the road, they have also faced a multitude of injuries and most recently, a revolving door of coaches. For the most part, they have been able to dodge the impact of the coronavirus. However, that all changed this week.

Despite being ready to take on the Bulls shorthanded, their season was suddenly paused due to health and safety protocols as coaches and players went into contact tracing and isolation. With a pair of games remaining before All-Star festivities, it would surprise no one if the Raptors didn’t play again until after the break.

Right now, the health of the players and their loved ones is far more important.

Some of the Raptors were using the hashtag #nosplits on social media to show that they were focused on winning their Philly-Toronto miniseries outright. However, it was instantly obvious that the 76ers were not messing around. They looked as advertised and put Toronto on their heels. The Raptors defense went to work and chipped away at the lead, but the 6ixers held fast. Toronto missed makeable shots, were lacking creativity and stubbed their toes just as momentum would build. They fought hard, cut the lead to 5, but got no closer.

Lowry rejoined the squad to take on the underperforming but always dangerous Heat on Wednesday. Miami played in their phosphorescent threads and were confidently riding a 3-game win streak. They are built in the same way as Toronto, they prioritize defense and a well-balanced team attack. KLOE’s fresh legs brought some much-needed intensity and purpose, he immediately lifted his teammates. Miami countered with bruising physicality led by Bam. Eventually fatigue set in and attrition wore on the Raptors, they fought to the final whistle but dropped their second straight.

Toronto was hit hard when 6 members of their coaching staff, including Nick Nurse, missed the game due to health and safety protocols. This gave Spanish National Coach and Raptors assistant Sergio Scariolo captain’s duties. Houston is in an identity crisis of their own, they have stalled since the injury to Christian Wood. The Raps were, understandably, disorganized early. The Rockets tried to strike in the midst of confusion, but the improving synergy of the Raptors catapulted them ahead. Toronto’s trio of guards overwhelmed the Rockets with 75 points. Houston nipped at their heels but there was no looking back. 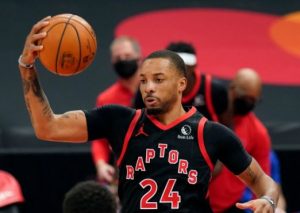 Gone are the days where Norm would put up 15 a game. No longer is he left to pick up starters scraps, he is now a pillar of Toronto’s scoring attack and expected to top 20 every night. Though it may seem like he is only putting up a few more points per game, in reality, Norm’s scoring has been more impactful than ever before and has been trending upwards all season. Teams must respect his shot, or he will burn them with impunity. 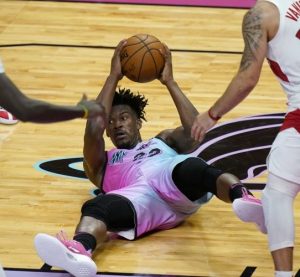 Like a reoccurring TV villain, Jimmy Butler had the Raptors screaming “not him again” on Wednesday. Jimmy was having a relatively quiet night until the 4th quarter where he took his game to another level. Down the stretch, it was like watching a man play among boys. With a few deliberate, efficient moves and a cheeky half smile, he closed the door on any idea of a comeback and secured the win in business like fashion. 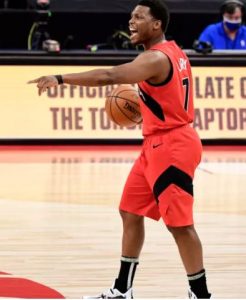 Lowry had a standout game on Friday as he led Toronto to a win, picking up his 18th career triple double in the process. He manned the reins while also acting the part of de facto coach. Kyle had 5 fouls for a good chunk of the 4th quarter and played on the edge of chaos with gritty resolution. He talked smack, grifted every trick in the book and bailed out the Raptors with deep bombs. 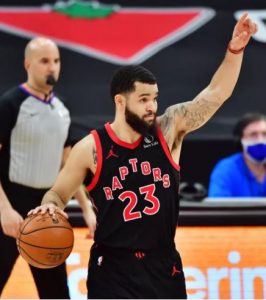 As Toronto’s best player this season, Fred may have a small gripe about the lack of All-Star buzz. He’s had better scoring games but he continues to produce in other areas. Most notably this week was his underappreciated defensive effort. His hands moved like flashes of lightning, especially in the paint, swiping and snatching anything that came into his radius. He had 4 blocks(!) and 2 steals against Philly and picked up 3 more against Houston.

Toronto had two games left on their schedule before the All-Star break, a Tuesday night tune up against the Pistons in Tampa and a Thursday night matchup against the Celtics in Boston. In light of recent news, these games remain in doubt.